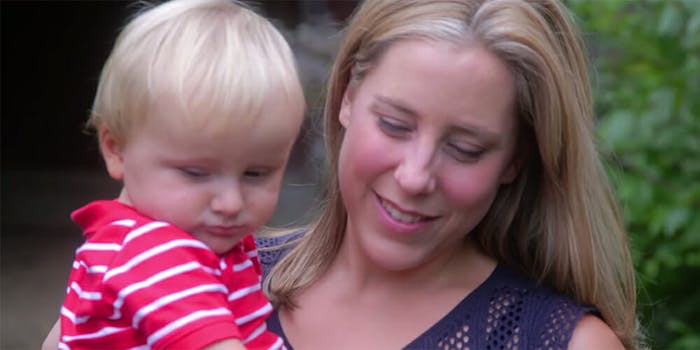 She called the FEC's decision 'groundbreaking.'

For the first time, a woman running for Congress has been granted permission to use part of her campaign funds to pay for child care.

The Federal Election Commission on Thursday greenlighted Liuba Grechen Shirley, a New York mother of two toddlers who is running for Congress on Long Island, to direct $440 per week for a babysitter, according to BuzzFeed News,

Grechen Shirley petitioned the FEC last month, writing in her letter that before running for office, she worked fulltime from home and cared for her 3-year-old daughter and 2-year-old son.

“It’s a juggling act every day,” Grechen Shirley told reporters on a conference call. “I take conference calls while nursing my son and while my daughter is running around and playing.”

She hired a part-time babysitter to focus on the campaign but said she would need full-time care “to run a successful campaign” as primary elections approach. The FEC agreed.

“The Commission concludes that your authorized campaign committee may use campaign funds to pay for the childcare expenses described in your request because such expenses would not exist irrespective of your candidacy,” the commission wrote in its ruling.

WE WON! Thank you to the FEC Commissioners for their unanimous vote to approve our request to use campaign funds for childcare! This is a game changer for women and parents considering a run for office. pic.twitter.com/FUfrxXOmVS

Grechen Shirley, a Democrat who was backed by 24 members of Congress and former presidential candidate Hillary Clinton in letters of support, said she hopes the decision will allow more women to run for office.

“There’s a reason more than half of Congressmembers are millionaires: running for office takes a huge toll on a family’s budget, especially while raising children,” she said in a statement. “This groundbreaking decision will remove a major financial obstacle for working families and mothers at a time when women are increasingly considering elected office.”

Last month, Sen. Tammy Duckworth (D-Ill.) became the first sitting Congresswoman to give birth while in office. The Senate then voted unanimously to accept Duckworth’s proposal to allow babies in the chamber.