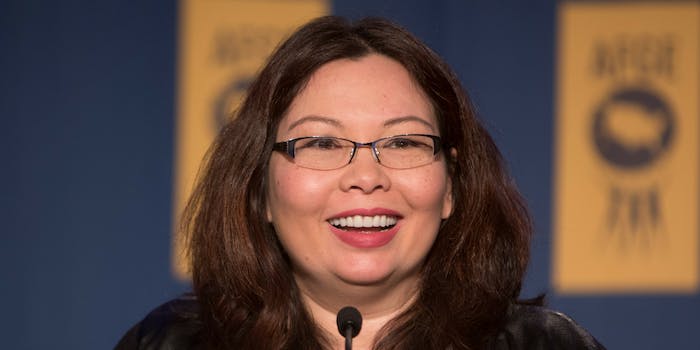 Sen. Tammy Duckworth becomes first senator to give birth while in office

The baby's name is Maile Pearl.

Illinois Democratic Sen. Tammy Duckworth gave birth on Monday, making her the first U.S. senator to do so while in office. Duckworth’s first daughter, who she had in 2014, was born while Duckworth served in the House of Representatives.

“Bryan, Abigail and I couldn’t be happier to welcome little Maile Pearl as the newest addition to our family and we’re deeply honored that our good friend Senator [Daniel] Akaka was able to bless her name for us—his help in naming both of our daughters means he will always be with us,” a statement from Duckworth’s office read, according to CNN.

According to an aide, Duckworth is taking 12 weeks to be with her daughter but gave birth in Washington, D.C., instead of near the family’s home in Chicago in order to make her available to vote.

Duckworth’s statement went on to advocate for Senate rules to be changed so that she can bring Maile Pearl with her to Senate votes.