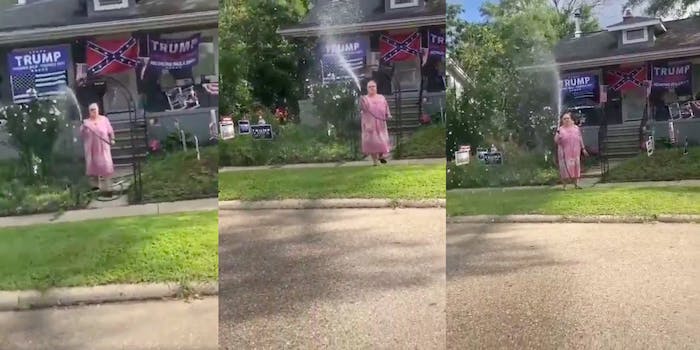 The woman's house is decorated with Confederate, pro-Trump, and Blue Lives Matter flags.

A video of a “Karen” wielding a garden hose and appearing to spray it at a pedestrian is going viral.

In the video, the woman is standing outside of her house, which is decorated with Confederate, pro-President Donald Trump, and Blue Lives Matter flags and signs.

“Get out of here, I ain’t playing with your f*cking ass,” she says, appearing to spray the hose at the woman filming her. “I don’t where the f*ck you came from, but get the f*ck out of here!”

It is unclear what “art” the filmer is referring to as she is off-camera. The Karen aims the water hose at both the filmer and at the ground.

The hose-wielding Karen continues to yell from the front of her house. “Get the f*ck out of here, you ain’t gotta be doing that shit here,” she says. “Go f*cking do that shit somewhere else!”

The woman recording points out that she’s on “a public street,” not on Karen’s property and that the woman is flying a Confederate flag. “I don’t give a f*ck, this is my house! I don’t care, you’re not doing it!” the Karen shouts.

The woman then furiously retreats back into the house and throws her still-turned-on garden hose on the lawn.

“You’re hose in on,” the filmer says to her.