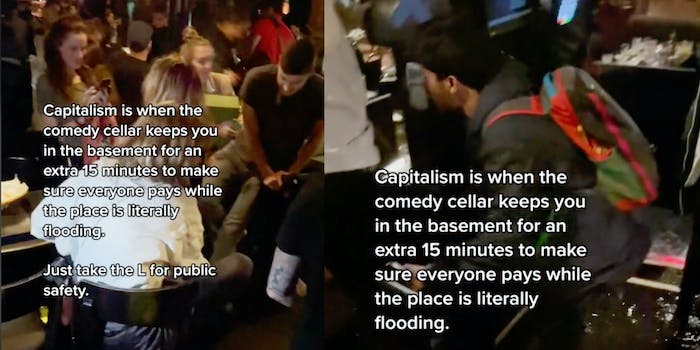 'The place is literally flooding.'

A viral TikTok video shows customers at iconic New York City comedy club the Comedy Cellar standing in several inches of water so that they could allegedly finish paying.

The caption of the TikTok claims the customers were kept in the basement by Comedy Cellar for “an extra 15 minutes to make sure everyone pays while the place is literally flooding.”

The caption blamed “capitalism” and urged the comedy club to “just take the L for public safety.”

The TikToker who posted the video, @brklynhealth, set it to Doja Cat’s “Get Into It (Yuh).” It shows the crowded underground space of the Comedy Cellar flooding due to Hurricane Ida, and New Yorkers panicking as the water crept up to their sneakers.

Since it was posted on Wednesday night, the video from inside Comedy Cellar amassed over 37,000 likes and almost 2,000 comments. Commenters are divided, with some supporting the small business’ decision to make money in tight times and others criticizing the comedy club for holding customers.

“That’s not capitalism… if you were concerned for public safety, you wouldn’t have gone out in the storm,” says @wessayshi.

“A business is supposed to have insurance for things like that which makes it even weirder,” another said.

Update 6:53am CT Sept. 3: When reached for comment by the Daily Dot, @brklynhealth called Comedy Cellar’s decision “a bit irresponsible” and said that the comedy club took up customers’ cards before making them wait.

“Folks would have left earlier if they weren’t waiting to get their credit cards back. 15 minutes is a long time in this situation,” @brklynhealth said.

The Daily Dot has reached out to Comedy Cellar.