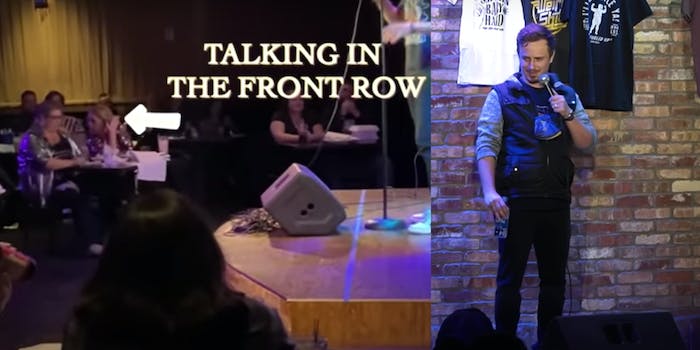 ‘You sound divorced’: Video shows comedian ‘humiliating’ a Karen who got kicked out of show

It's received hundreds of supportive comments, but no one seemed to point out the misogyny.

Comedian Cody Woods recently released footage of a New Year’s Eve gig, where he ran as a supporting act, with the promise that “torched” a “chatty” Karen in the audience.

In the video, he includes a disclaimer in which he puts his day “into context” by talking about the long flight delay he’d experienced at LAX.

In it, Woods alleges that the supposed Karen was incredibly rude; sitting in the front row and openly texting on her phone, talking not just to her friend but people at other tables who weren’t even part of her party, and making rude faces at a performer to “get in his head.”

“Your friend is so much more fun than you; it’s insane,” he tells the woman. “No one’s gonna take you home—that’s the problem. As long as your manners are missing, so will the wedding ring be.”

The woman tells him she’s “been there, done that.”

“Been there, done that?” he questions. “I can tell. You sound divorced.”

He then calls the woman a Karen.

The woman protests that she’s not a Karen and that her name is Gigi. Woods uses this to segue into making jokes that are arguably extremely whorephobic and misogynistic, telling Gigi-Karen that she’s dressed like she “works the corner” and asking her, “How much for a chicken twister around the corner, know what I’m saying?” At one point, later on in the set, he announces that “vagina is overpriced.”

The woman can later be seen being escorted out of the show.

While the video has been viewed over 660,000 times, upvoted 19,000 times, received hundreds of supportive comments, and even made its way to the Fuck You Karen subreddit, no one seemed to point out the misogyny his jokes against the woman are filled with.

The woman deserved to be called out for being an allegedly rude audience member, and she seemingly deserved to be eventually booted from the venue. However, there are much better ways to demolish a Karen—TikTok is full of them—than resorting to misogyny.