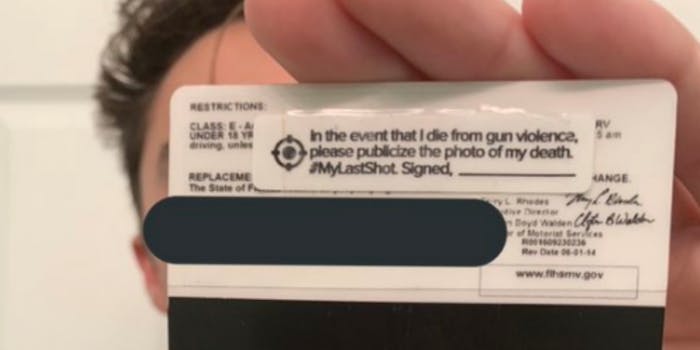 #MyLastShot campaign aims to show the impact of gun violence.

The #MyLastShot project encourages students to put a sticker on their cellphones or IDs giving permission for photos of their bodies to be publicized if they ever are killed by gun violence.

The sticker reads, “In the event that I die from gun violence, please publicize the photo of my death,” with a line for participants to sign their names.

It also calls for advocates to designate someone to make sure the directions of the sticker are carried out.

Tyner referred to the murder of 14-year-old Emmett Till, whose mother insisted that her son’s mutilated body be seen. Till’s murder brought attention to the brutality of racism.

Media organizations often do not publish graphic images of crime scenes. The Poynter Insitute has published guidelines for dealing with these kinds of tragedies, Denver7 News points out. Tyner told CNN that she could see the images making their way through social media, rather than through traditional media sources.

A promotional video announcing the campaign says Americans are numb to numbers and statistics — that graphic images stick with viewers and readers.

When it comes to gun violence ignorance isn’t bliss. So whatever you do, don’t look away.” #MyLastShot #EndGunViolence pic.twitter.com/7SQJXn0A9r

David Hogg, a well-known gun control activist and survivor of the Marjory Stoneman Douglas High School shooting in 2018, has already posted a photo of his sticker on Twitter.

In the event that I die from gun violence, please publicize the photo of my death #MyLastShot pic.twitter.com/Cx0l4lY0aX

The initiative was unveiled just weeks before the 20th anniversary of the 1999 Columbine High School mass shooting that left 12 students and one teacher dead.