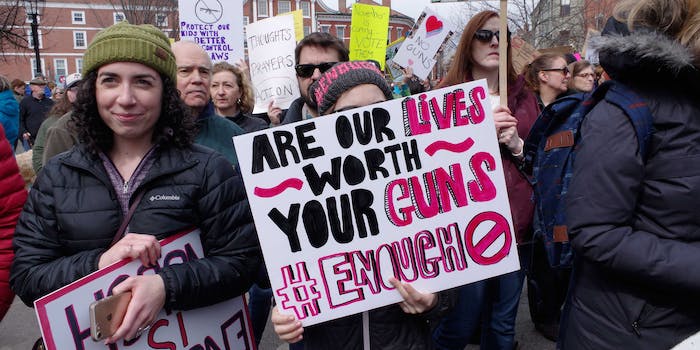 The newspaper updated its story amid backlash.

As Feb. 14 approaches, America nears the anniversary of a day that unequivocally changed the issue of gun reform: the Parkland high-school shooting. The survivors-turned-teen activists have been celebrated and invited on national platforms to share their voices this week—but so was Nikolas Cruz, who carried out the shooting.

USA Today on Monday profiled some of “some of the people [who] thrust into the spotlight by the tragedy.” On that list, alongside students who changed the gun debate in America, was Cruz. It upset people who actually survived his crime to be featured as among those “who rose to prominence” in the aftermath of the shooting.

The shooter at MSD literally made a video of himself saying he was going to get famous by shooting up our school before the shooting and you graciously made his dreams come true. https://t.co/0P4htY189v

I cannot Believe that @USATODAY would publish the face, name, and fucking biography of the shooter from our shooting -not only are you retraumarizing a whole community but you’re makin money off of it and you’re making him famous, exactly what he wanted. Boycott anyone ? https://t.co/Aux7FBwjco

Teen activists Emma Gonzalez and David Hogg rose to prominence for their statements in front of the media in the immediate aftermath of the shooting at Marjory Stoneman Douglas High School in Parkland, Florida, on Valentine’s Day last year. Activism inspired by the duo, along with March For our Lives co-founders Cameron Kasky, Jaclyn Corin, and Alex Wind, spread across the country and fueled the gun-reform debate.

As Hogg says, Cruz explicitly said on social media that the shooting would be his claim to fame, and any media putting him in the limelight is just complying with his agenda. USA Today issued an update to the story Tuesday morning, removing Cruz’s photo and changing how the paper originally characterized him.

Studies show, time and again, that using photos of mass shooters in media coverage can inspire copycat acts because of the notoriety brought to mass shooters.

The teen activists’ anger resonated with others on social media:

Honestly I didn’t remember the name of the shooter until today. I agree he shouldn’t be given any publicity.

Some expressed their solidarity with the teens:

For what it's worth, I don't remember his name (I didn't read the article), but I remember your name as well as that of Emma Gonzalez and other Parkland heros.

Emma, I don’t remember his name, and I promise not to look it up, but I know your name. I’ll stay away from USA Today until you tell us they took the article down.

We need to pass a law prohibiting the use of the name and face of mass shooters. Just black out their faces and give them numbers like #2019Ahole22

There’s no new information about Cruz in USA Today‘s “profile” and it’s unclear why he’s on this list. Others on the list include the school superintendent and other members of the sheriff’s department in Parkland. While it may be important for the general public to know the name of a mass shooter, it’s avoidable to feature him on a list of people whose lives have been “transformed.”