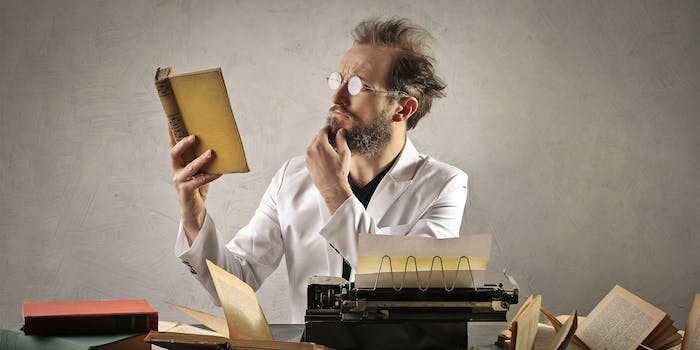 Somehow people who treat victims of gun violence shouldn't have a say?

The National Rifle Association is getting dunked on by Twitter, this time for a thoughtless tweet insinuating that doctors, the people who save the lives of and heal people who survive gun violence, aren’t experts on gun violence themselves.

The tweet in question was shared on Nov. 7, prior to last night’s Thousand Oaks mass shooting that killed 12 people in the suburbs of Los Angeles (though, given how prevalently mass shootings happen in the U.S., it’s unclear when isn’t a bad time to tweet NRA propaganda). It links to an article of NRA analysis of another article on gun control written by the American College of Physicians and published in the medical journal the Annals of Internal Medicine.

In the tweet sharing the analysis, the NRA wrote that “someone should tell self-important anti-fun doctors to stay in their lane.” To the NRA, it was a problem that half the articles in the medical journal were for gun control and that the medical industry was even butting into this argument, as if they didn’t have a stake in it. “Most upsetting, however, the medical community seems to have consulted NO ONE but themselves.”

Someone should tell self-important anti-gun doctors to stay in their lane. Half of the articles in Annals of Internal Medicine are pushing for gun control. Most upsetting, however, the medical community seems to have consulted NO ONE but themselves. https://t.co/oCR3uiLtS7

Despite the NRA’s brazen attempt to discount the “medical community” and their role in understanding the conversation around gun control, the Venn diagram of gun control experts and doctors is a near-perfect circle.

In 2018 alone, on this 312th day of the year, the U.S. has experienced more than 375 mass shootings, according to Mass Shooting Tracker, while the Gun Violence Archive reports 307 mass shootings (the tracker counts shootings with at least four people shot including the shooter, while the archive only counts at least four people not including the shooter). By the lowest count, at least 1,228 people have been gun violence victims or survivors this year, with EMT first responders bringing possibly hundreds of survivors for medical attention, at which point surgeons, doctors, nurses, and physical therapists within the “medical community” work to save, heal, and rehabilitate survivors.

Like hell, the “medical community” shouldn’t have working opinions and suggestions on changing our culture of gun violence. If I found myself having to save survivors of gun violence on a regular basis, I might have a better idea of how this endemic is affecting people, and how it can be addressed, too.

On Twitter,  members of the medical community and their supporters responded to the NRA’s tweet, questioning why it doesn’t find doctors qualified enough to weigh in gun violence and solutions. “This is our lane,” is their resounding message.

Who do you think removes bullets from spines and repairs (or tries to) livers blasted by an AR-15? The tooth fairy? This literally is medicine’s lane. https://t.co/V9yi1M6ecJ

As a friend, who is a well respected surgeon put it – they're the ones who have to patch up gunshot victims, talk to their families if they don't make it. This IS their lane. https://t.co/8MaqmgIxuY

In the wake of the mass shooting in the community of Thousand Oaks, many others have picked up the NRA’s Bad Tweet, shaming them for trying discount people who are in the business of saving lives.

NRA, again trying to intimidate people and to force them from telling the truth. I am thankful for the doctors who truthfully described how AR 15 bullets destroyed my daughters body. She was hit by a single bullet that destroyed her spine and spinal cord. Sometimes truth hurts. https://t.co/eSP479XEEl

Ask your doctor to ask the NRA if getting shot is bad for you. https://t.co/jexInwjiFR

I know, right? Arrogant doctors keep using their years of study and experience to remove bullets, aka "freedom pellets," from our bodies.

Telling doctors who treat victims of gun shots to "stay in their lane" and not write about what they know is peak NRA despotism https://t.co/Mq51TWTsNU

Perhaps people are upset at the NRA because of this extremely flawed understanding of who qualifies as a gun control expert. Perhaps they’re upset because the NRA is tweeting bad takes all willy-nilly without realizing they’ll probably be tweeting something dumb amid, or before, a mass shooting. Alas, the internet has bested the NRA, once again.