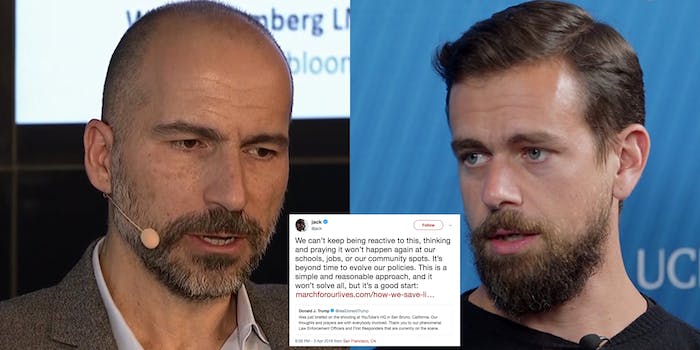 The CEOs of Twitter, Uber, Apple, and Amazon all made statements.

Tech industry executives tweeted their support, and some called for gun control, following a shooting Tuesday at YouTube’s headquarters in San Bruno, California.

Three people were being treated for gunshot wounds and a third for an ankle injury after a shooter opened fire at the headquarters before dying of a self-inflicted gunshot wound, authorities have confirmed.

After the incident, Twitter CEO Jack Dorsey called for gun control legislation and posted a link to the March for Our Lives website, writing that “it’s beyond time to evolve our policies.”

We can’t keep being reactive to this, thinking and praying it won’t happen again at our schools, jobs, or our community spots. It’s beyond time to evolve our policies. This is a simple and reasonable approach, and it won’t solve all, but it’s a good start: https://t.co/ADYalbaO57 https://t.co/nbXpH9DDyT

Dorsey had also pledged to help stop the spread of misinformation during news of the shooting.

Uber CEO Dara Khosrowshahi expressed sympathies for the employees affected by the shooting, adding the incident was “another tragedy that should push us again to #EndGunViolence.”

On behalf of the team at @Uber, sending support to everyone @YouTube and @Google, and gratitude to the heroic first responders. Another tragedy that should push us again to #EndGunViolence

From everyone at Apple, we send our sympathy and support to the team at YouTube and Google, especially the victims and their families.

Horrible and truly tragic day for YouTube and Google. We are wishing all our very best for the injured and all those affected.

In the aftermath of the shooting, Google CEO Sundar Pichai tweeted a note of gratitude and support to employees, following it up with a heartfelt tweet on his personal account.

There are no words to describe the tragedy that occurred today. @SusanWojcicki & I are focused on supporting our employees & the @YouTube community through this difficult time together. Thank you to the police & first responders for their efforts, and to all for msgs of support.

YouTube CEO tweeted that there were “no words to describe how horrible it was to have an active shooter” at the headquarters, adding the company “will come together to heal as a family.”

There are no words to describe how horrible it was to have an active shooter @YouTube today. Our deepest gratitude to law enforcement & first responders for their rapid response. Our hearts go out to all those injured & impacted today. We will come together to heal as a family.