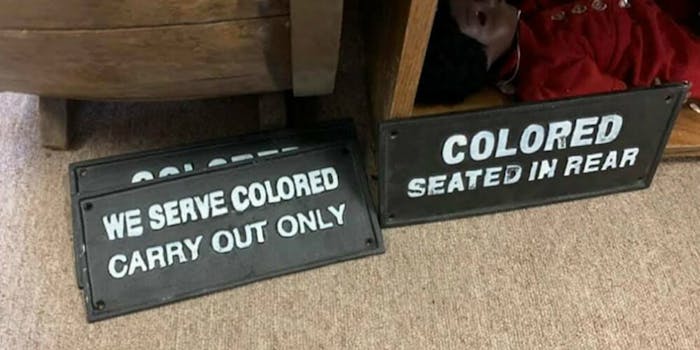 The store is selling a variety of racist signs.

Nicola Shanks, a Colorado woman, is calling out the owner Antique Corral, who she said is selling racist and offensive “white only” signage, according to NBC News.

Shanks said she was shopping in the store several months ago while visiting Cortez, a town near the Utah border. At the store, Shanks said she saw signs that read, “Public swimming pool white only,” “We serve colored carry out only,” and “Colored seated in rear.”

Please forgive me if I post incorrectly. Advice regarding racist items being sold in an antique store. These items are…

Shanks, who told NBC News she has a daughter who is Black, said the signs represent a painful part of the nation’s history. She advocated for the items to be shown in a museum rather than a store shelf.

“We don’t need to profit off of replica Jim Crow-era signs,” she said.

At the time of the incident, Shanks said she demanded to speak to the owner, Cheryl Dean, who wasn’t around. Shanks reportedly spent months unsuccessfully trying to reach Dean. Then, Shanks went back to the store and demanded Dean remove the signs.

“She told me to go back to England where I came from,” Shanks wrote on her Facebook page, per NBC News.

Dean told NBC News that she’s been selling the signs in her store off and on for the past 15 years and has never received a complaint. She also didn’t understand why the signs are considered racist.

“They have been in my store off and on. It’s not like I go and hunt these signs down,” she said. “One person in 15 years complains, and it goes viral.”

“It’s part of history,” she continued. “And if you ignore history, you repeat it. I don’t see a problem with them.”

Dean told the outlet that since the photos of her signs went viral, she’s received threats to burn her shop down and has been called a racist. She also said she sold out of the signs due to the publicity her store has received and does not plan to purchase any more for her store.