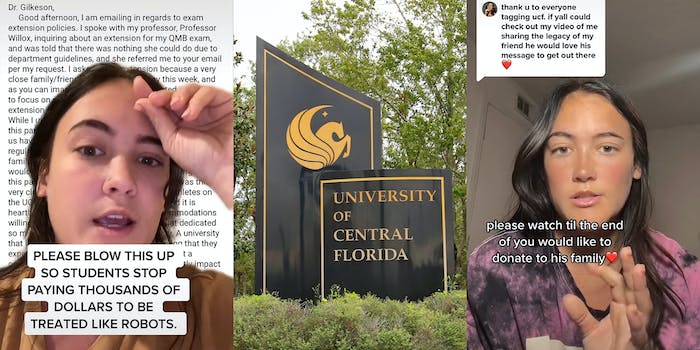 ‘Colleges lack so much empathy’: Student calls out professor who made her take an exam after her friend died, sparking outrage

In a viral video, a student called out University of Central Florida faculty for making her take an exam the same week her friend passed away even though she asked for an extension.

“No 22-year-old should have to go to their 22-year-old best friend’s funeral and be expected to shut their emotions off like a robot and take an exam,” the TikToker said.

In the video, TikToker Jadyn Fowler (@jadynelizabethh) shared that her close friend Nixolas Thomas, a fellow student at the university and member of the cheer squad, died last week.

@jadynelizabethh tiktok PLEASE DO YOUR THING ON THIS VIDEO OUT OF ALL VIDEOS ON MY PAGE. @UCF ♬ original sound – Jadyn

She showed the dean’s response to her email. He wrote back, “While I understand it is difficult to lose a friend Dr. Willox is properly following UCF policy regarding excused absences.”

“I know damn well that if this man lost a friend as close as I did, he would not be at work,” Fowler said in her video.

Fowler told the Daily Dot that the department’s guidelines, which only allow extensions for deaths of immediate family members, aren’t practical.

Her video garnered over 52,400 views by Thursday and sparked outrage in the comments.

“I’m so sorry for your loss. Colleges lack so much empathy; Students need SUPPORT more than anything,” a user commented.

“It is so insanely infuriating the total power colleges have over students (and to see how often they abuse that power),” another user commented.

Some users said they’ve had similar experiences at the University of Central Florida and tagged the school in comments. “I failed a class at @UCF last fall because of the attendance policy in the Early childhood education program because I was in the HOSPITAL with documents,” one user claimed.

Fowler told the Daily Dot that although the departments like Student Services did reach out to her to offer mental health counseling and resources, they weren’t able to help her get an extension.

Fowler said she’s also been in contact with the dean of the School of Business, who was more sensitive to her loss and would be contacting her professor.

Fowler said she appreciates the comments concerning her failing grade and advice about re-taking the exam. But she’s mainly disappointed in the department’s lack of empathy.

“The exam extension would have been helpful, but the main issue that I’m trying to tackle here is the way that they treat their students,” she said. “His response was the most unprofessional and disheartening thing I’ve seen in a long time.”

The Daily Dot reached out to the University of Central Florida’s dean of the Integrated Business Department, the Office of Students Rights and Responsibilities, and the dean of the School of Business.