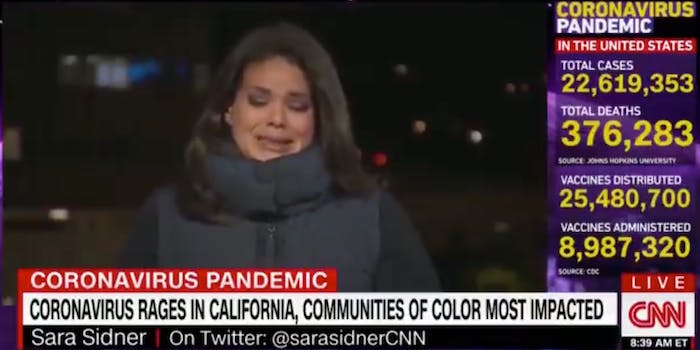 'This is heartbreaking to watch.'

A CNN correspondent broke down in tears while covering the coronavirus crisis in Los Angeles and how it has particularly impacted Black and Latino people in the U.S.

COVID-19 has reportedly killed over 30,300 people in California. There have been 2.7 million cases in the state, and the post-Christmas surge of cases is only worsening, according to the Los Angeles Times.

During a live broadcast on Tuesday, CNN’s Sara Sidner was reporting on a family that is grieving the loss of two of its members. She spotlighted L.A. resident Juliana Jimenez Sesma, who lost her mother and stepfather within an 11-day span. Sesma’s stepfather died COVID-19, and then mere days later, Sesma had to hold her mother’s funeral in a parking lot after she, too, died of COVID-19.

“This is the 10th hospital that I have been in,” a choked-up Sidner says as she sobs and struggles to get her words out. “And to see the way that these families have to live after this and the heartache that goes so far and so wide. It’s really hard to take.”

Sidner was reporting from Martin Luther King Jr. Community Hospital, which is, according to the Guardian, located in one of the worst hotspots in the nation—a predominately Latino and Black neighborhood in South Los Angeles.

“These families should not be going through this,” Sidner continues. “No family should be going through this. So please, listen to what this family is saying: Don’t let this be you. Do whatever you can to keep this from killing your family members, and your neighbors, and your friends, and your teachers, and doctors, and firefighters. All of these people are here to help you, but you have to do your part.”

The video went viral on Tuesday, with many viewers calling it “heartbreaking to watch” and are using it to urge the public to wear face masks.

Sidner later tweeted, “I’m still not okay after seeing the heartbreak in the City of Angels because of #coronavirus. I know that being there to see the destruction it’s doing to families is small in comparison to the pain the families feel.”