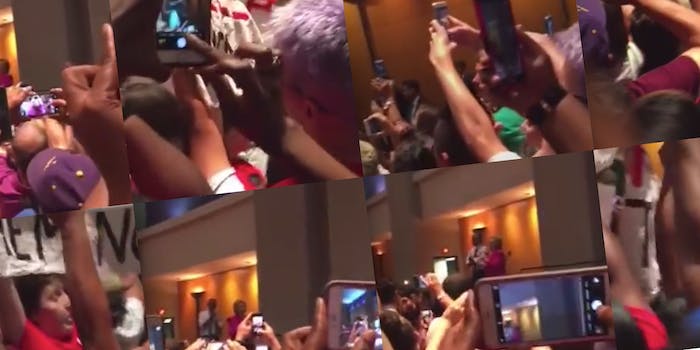 'Our students are being picked up by ICE on their way to school.'

Chanting “no more deportations” and unfurling a large banner, a group of school teachers interrupted Hillary Clinton and President Barack Obama at a Charlotte, North Carolina, campaign event on Tuesday.

The teachers showed up at the speech in order to demand the release of several of their teen students who had recently been removed from school and placed in immigration detention centers.

Clinton, the presumptive Democratic nominee, said in a March debate that she “will not deport children” as president in direct contrast to continuing Immigration and Customs Enforcement (ICE) child deportations under the Obama administration.

“Our students are being picked up by ICE on their way to school,” said the group of teachers in a statement released by the #Not1More anti-deportation campaign.

“Yefri Sorto Hernandez was taken from his bus stop in Charlotte in January while his mother watched from the window. Wildin Guillen Acosta was picked up a day later outside his Durham home on his way to Riverside High. Hundreds more youth have been targeted and arrested by ICE in recent months. Some have been deported. Others, like Wildin, sit in jail cells with no release in sight.”

According to the teachers’ statement, most of the kids who have been sent to ICE detention centers are Central American refugees whose families fled gang violence. Some were picked up by immigration officers while waiting for buses on their way to school.

Video from the Clinton–Obama speech shows a group of teachers unfurling a banner that reads “Release Them Now,” while others hold up photographs of the jailed students’ faces. (Note: the video is upside-down but still provides a record of events.)

The teachers said they were seeking the release of twelve underage students who are being held at Georgia’s Stewart and Irwin Detention Center. Those students were arrested by immigration officers in North Carolina and Georgia.

One Durham, North Carolina middle school teacher said in the statement that she wanted to see Wildin Guillen Acosta—arrested by ICE agents on his way to school—released so that he can “survive, learn, and thrive.” In recent weeks, Acosta has become the face of a mounting opposition to child deportations and ICE sweeps of schoolchildren, using the hashtag #FreeWildin on social media.

“Wildin came to Durham, NC seeking the safety to be a kid, learn, and make a life,” said teacher Holly Hardin. “His capture, detention, isolation in solitary, and potential deportation puts Wildin into harm’s way.  I am here to ask Obama to dismantle the system that captures immigrants that he created during his presidency, in order to protect all my students.”