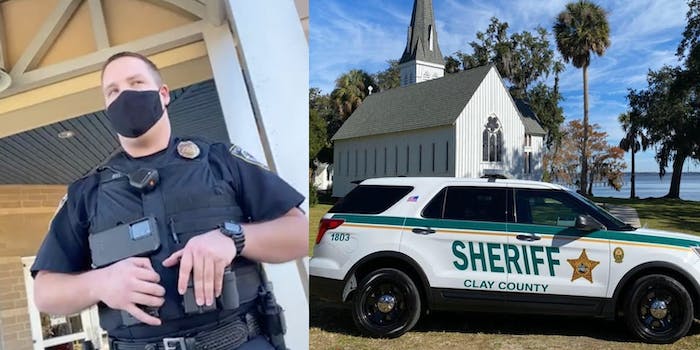 The officer was placed on leave.

A Florida cop has reportedly been placed on leave after he was confronted by a citizen on Facebook Live for allegedly asking a 14-year-old for bikini photos.

Nathan Waits of Jacksonville, Florida, streamed on Facebook Live as he confronted a Clay County officer outside a school on Tuesday. He went live from the Facebook page “Waits List,” a non-profit working with child safety.

In the video, Waits records himself walking into a school and asking to speak with a school cop. The attendant informs him that the cop is with a student, and Waits responds, “He shouldn’t be.”

When the officer emerges, he says to Waits, “I have no idea who you are.”

“You know my 14-year-old niece,” Waits responds, “the one you want sexy bikini pictures from, the one you wanna wrestle and meet at her house when her mother’s gone?”

The officer doesn’t admit to or deny the claims being made, staying silent instead.

“Do you not think that’s inappropriate?” Waits asks. “You know what you can or can’t say to go to prison?”

“And you’re working at a school? Are you kidding?” Waits later questions.

The officer remains silent and looks uncomfortable throughout the video.

According to Action News Jax, the officer in question has been placed on administrative leave.

Waits told Action News Jax that the officer was under the impression he was messaging a 14-year-old girl but was actually unknowingly texting his Waits List organization.

Waits also said he reached out to the Clay County Sheriff’s Office in October about the issue. The sheriff’s office claimed it received no such notification.