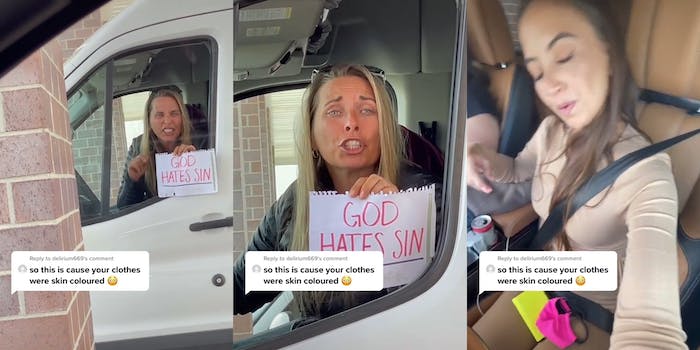 ‘How much is your hymen worth?’ Christian ‘Karen’ slut-shames TikToker for wearing beige shirt and pants

'In the Bible they call you a wh*re, Jezebel.'

A venomous Christian “Karen” went full fire-and-brimstone on an unsuspecting TikToker in a parking lot last week, calling the woman a “seductress” and “whore” for *checks notes* wearing a beige shirt and pants.

TikToker Kristina Garcia (@mrs.kristingarcia) uploaded the video last week; it apparently got removed for violating TikTok’s anti-bullying policy but was re-uploaded on April 11, and has since earned more than 2.2 million views.

Garcia is sitting in the car with her sister, filming a blonde woman in a nearby van who’s holding a piece of paper that says “God hates sin” against her window. This, obviously, is Karen.

“Sinner,” Karen calls Garcia. “Who walks through the parking lot naked? Who does that?”

Garcia is bemused by Karen’s hysterics, saying gleefully, “Oh my gosh, I met my first Karen!”

But Karen is determined to break her spirit. “You’re a seductress. In the Bible they call you a whore, Jezebel,” she says. “You’ve got to repent. That is so dirty. You’re swinging your stuff around, waiting for people to crash so they can watch you. That’s disgusting.”

Garcia’s sister begins to argue, but Karen cuts her off and asks Garcia, “How much is your hymen worth?”

“Are you the mom?” she then asks Garcia’s sister. “Are you the one clapping it? Clapping for her? ‘Yay, you look so sexy going to hell. Way to go.’”

“Are you judging my judgment, you hypocrite?” Karen fires back. (Yes, this is real life.)

“You go to cuss with that mouth,” Karen says, pointing to her teeth. “You probably go to church. Yep.” She calls Garcia a sinner one more time as Garcia’s sister rolls up their window.

Garcia, who’s still being a good sport about incurring the wrath of Karen, then turns the camera on herself to reveal what she’s wearing. Turns out her scandalous outfit is a beige long-sleeve shirt and pants. Real heretic hours.

In another TikTok, Garcia explains that the altercation was unprompted. As she exited the gas station, another woman from Karen’s car walked up to her with a sign and said, “Do you know God hates sin?”

Garcia got in her car and saw a woman waving at her from another car. Lo and behold, there was Karen, making a “W” with her fingers and shouting, “You’re a whore!”

“Beside the point: I do believe in God, I do pray every day, and I’ve never said or did anything to this lady, and I don’t believe in doing that,” Garcia says in her second explanation video. “Anyways, if you don’t like it, don’t look.”