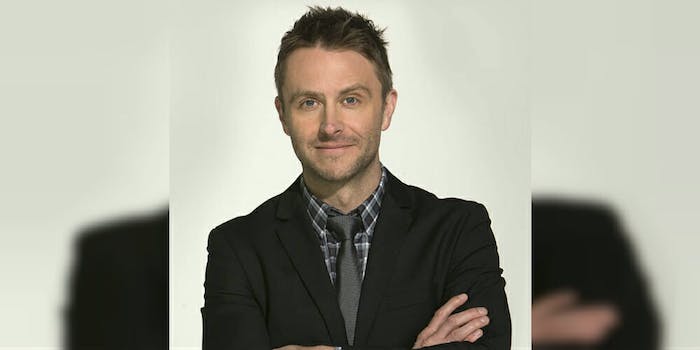 Chris Hardwick is coming back for Borderlands 3 despite abuse allegations

It is, unfortunately, unsurprising.

Chris Hardwick will be returning to work with Gearbox on Borderlands 3 in spite of the abuse allegations leveled against him, the Verge reports.

A Gearbox spokesperson confirmed to the Verge that Hardwick would be reprising his role as the voice of Vaughn, a character introduced in Tales from the Borderlands. The developer declined to share any further information on what went into the decision.

Less than a year ago, actress Chloe Dykstra detailed her experience of sexual and emotional abuse at the hands of her ex-boyfriend in a Medium post. Although she didn’t identify Hardwick within the post, people were able to connect the dots in her descriptions. He was dropped from panels at Comic-Con and disavowed by the writers of the site he founded, the Nerdist. His AMC show, Talking With Chris Hardwick, was canceled.

However, the next month, AMC said Hardwick would be returning to the shows following an “investigation.” The statement from AMC noticeably did not state if the network had found any credible evidence of abuse or proof of innocence. Also notable is that the law firm behind the investigation also represents Hardwick’s wife’s family, which many saw as a conflict of interest.

Unfortunately, men accused of abuse or misconduct in nerd spaces often face very little real or lasting consequences. There is a pattern of alleged abusers in the video game industry going quiet for a period of time, then attempting to return and rebrand.

It’s hardly surprising, then, that Gearbox would bring back Hardwick for Borderlands 3. There’s also a history of allegations against Gearbox’s CEO, Randy Pitchford, who’s been accused of keeping a personal collection of “underage pornography” on a USB drive along with important work files and using Gearbox funds to host sexually explicit parties at his home with minors present.

“I hate saying this as a huge fan of Gearbox games and (most of) the developers who work on them,” Dykstra said on Twitter in response to the news. “After having had a personal/working relationship with the company, it’s hard for me to support the franchise anymore.”