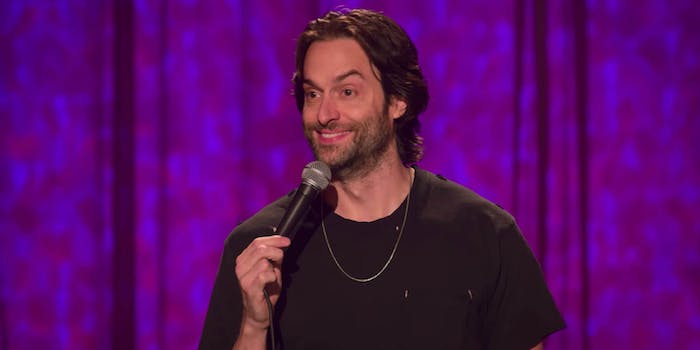 These haven't aged well considering what he stands accused of.

Chris D’Elia was accused of making sexual advances toward young girls, some as young as 16 years old, late Tuesday night. As he continues to trend throughout the day on Wednesday, Twitter users are dredging up his old tweets that haven’t aged well considering what he stands accused of.

“Today I am playing a pedophile on Comedy Central,” one of his tweets from 2010 reads. “A pedophile… sooooo… career over.”

As Twitter user @Sincinnatus_ pointed out, D’Elia has portrayed a pedophile on more than one occasion. His most recent role was a comedian named Henderson in the Netflix series You. Henderson is later revealed to be a pedophile.

D’Elia also tweeted in 2012 that he had “Kevin Spacey’s direct office number.” In 2018, over 30 people accused Spacey of sexually assaulting them.

D’Elia is also being accused of deleting tweets. One of the tweets he allegedly tweeted—then deleted—said, “Girls mature earlier than boys, but that’s because you kind of HAVE to grow up when creepy old dudes are always trying to be inside of you.”

In addition to deleting old tweets, others are accusing D’elia of also “unsending Instagram DMs.”

D’Elia on Wednesday afternoon denied the allegations, telling TMZ in a statement, “I know I have said and done things that might have offended people during my career, but I have never knowingly pursued any underage women at any point. All of my relationships have been both legal and consensual and I have never met or exchanged any inappropriate photos with the people who have tweeted about me.”