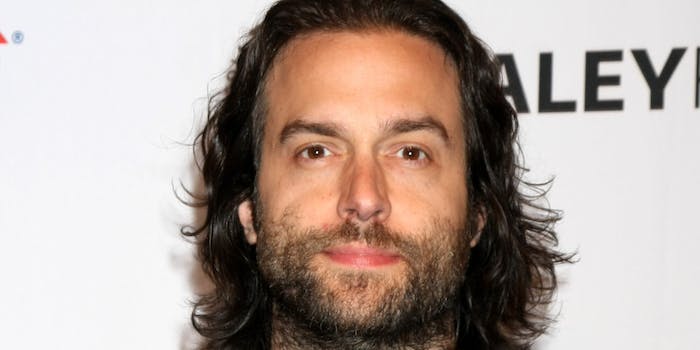 Women are accusing him of 'grooming' and blackmailing young girls.

Update 7:17pm CT, June 17: Chris D’elia denied allegations of sexual misconduct in a statement to TMZ on Wednesday afternoon. “I know I have said and done things that might have offended people during my career, but I have never knowingly pursued any underage women at any point,” D’Elia said. “All of my relationships have been both legal and consensual and I have never met or exchanged any inappropriate photos with the people who have tweeted about me. That being said, I really am truly sorry. I was a dumb guy who ABSOLUTELY let myself get caught up in my lifestyle. That’s MY fault. I own it. I’ve been reflecting on this for some time now and I promise I will continue to do better.”

A conversation about predatory behavior and sexual misconduct is unfurling on Twitter, all thanks to Twitter user @SheRatesDogs.

The Twitter account is known for shining a stark light on online sexual harassment. Typically, it shares text threads and messenger exchanges with blurred out names. This time, it’s taking a far more direct approach with a very specific target: comedian Chris D’elia.

D’elia is known for his roles in television series like The Good Doctor and You. Soon, however, chances are that he’ll be better known for the string of accusations @SheRatesDogs has leveled against him.

What quickly became a long list of accusations all began with a single tweet on Tuesday evening. @SheRatesDogs shared a thread from user @girlpowertbh accusing D’elia of “grooming” her when she was a 16-year-old girl. @SheRatesDogs retweeted the thread with the addition of another woman’s accusation.

Soon, a flood of accusations hit Twitter. @SheRatesDogs shared a handful of them to her page, which sparked a site-wide conversation. In no time, D’elia’s name was trending as dozens of women stepped forward to accuse him of making sexual advances toward them when they were underage.

By Wednesday morning, countless women reached out to @SheRatesDogs to share their stories, while others unpacked accounts on their own pages. Almost every new tweet echoed the last, diving into D’elia’s apparent history of predatory, manipulative behavior. Very few who came forward were over the age of 18 when their interactions with D’eila occurred. But even those rare few who were of legal age when they met D’elia had stories of blackmail and manipulation.

Meanwhile, the Twitter hashtag #ChrisDelia has been overtaken by memes and reactions to discovering the accusations against him. The majority of memes make dark jokes about D’elia’s tendency to play pedophiles in media. A few die-hard fans have questioned the allegations, but opinions at large are made up. Too many women have spoken up, and D’elia has been effectively canceled online.

The Daily Dot has reached out to D’elia’s team and will update with a response.