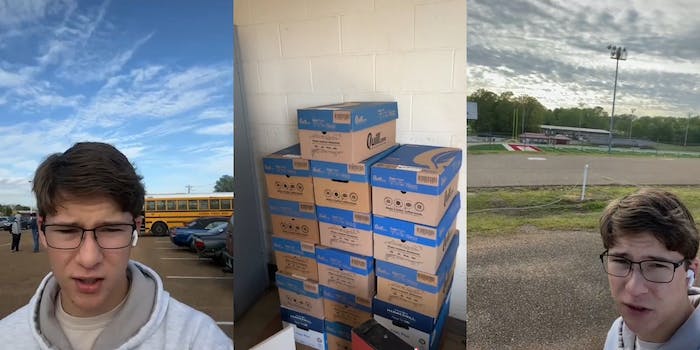 ‘American education is a joke’: High School student says his teacher forces students to do favors for the football team during class

TikTok creator @fryguy124 thought he was signing up for economics class but instead, he finds himself doing chores for the football team.

In a video with over 192,000 views, the high schooler reveals what he’s actually doing during his school day when he’s supposed to be in class.

“So, I always wondered why Americans lack understanding on economics, and then I got to high school economics class,” he says in the video. “I’m supposed to be in economics class right now but I’m out here shuttling shit for the football team.”

In the video, the creator explains his economics teacher is one of his high school’s football coaches. Rather than sitting in class, he claims that he’s carrying stuff to a supply closet for an upcoming fundraiser for the team.

“I have this class three times a week and all three times we’ve been doing chores for the football team,” he explains. “Until schools start prioritizing education this nation is just going to go down the toilet.”

The creator shared that the video was from a while back, saved as a draft, but claims the class is still not learning the curriculum. “That was an old video but I’m adding on to it today. I thought things were going to get better but no. They’re washing a bus today,” he adds.

“You’re learning the current economic system: exploited labor,” one comment on the video says that has garnered over 4,000 likes.

“Take sports out of school,” another person adds. “Players can join after-school leagues.”

User @svfeplvce writes, “its genuinely a wonder how people think we have the best country out there, especially in the field of education.”