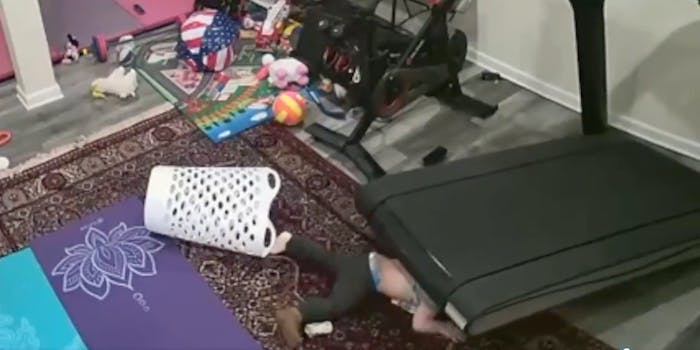 Another child reportedly died in an incident involving the machine.

A video posted online shows a small child getting dragged under a Peloton Tread+.

The video was shared by the US Consumer Product Safety Commission on Twitter and YouTube as it urged Peloton customers to cease using the  $4,295 machine. In the video, a ball the child is playing with gets trapped under the machine. As he tries to free the ball, he gets pulled underneath it.

“Stop Using the Peloton Tread+,” it warned in the Saturday tweet.

While the child seen in the video is reportedly OK, the safety commission claimed that one child died in one of the 39 incidents involving the treadmill.

“CPSC staff believes the Peloton Tread+ poses serious risks to children for abrasions, fractures, and death,” the agency said in a Saturday statement. “In light of multiple reports of children becoming entrapped, pinned, and pulled under the rear roller of the product, CPSC urges consumers with children at home to stop using the product immediately.”

CPSC added that customers who wish to continue using the machine should keep them away from children and pets as well as unplug them “when not in use.”

Peloton refuted the CPSC’s claims in a statement, calling the warnings “inaccurate and misleading,” and said that “there is no reason to stop using the Tread+ as long as all warnings and safety instructions are followed.”

“Peloton is disappointed that, despite its offers of collaboration, and despite the fact that the Tread+ complies with all applicable safety standards, CPSC was unwilling to engage in any meaningful discussions with Peloton before issuing its inaccurate and misleading press release,” the statement said.

“The importance of following Peloton’s safety warnings and instructions is abundantly clear in the video that CPSC included in its unilateral press release. In particular, Peloton instructs Members to remove the Safety Key when the Tread+ is not in use, precisely to avoid the kind of incident that this video depicts,” it said. “The Tread+ includes safety warnings and instructions in several places, including in the user manual, in a safety card left on top of the Tread+ tray on delivery, and on the product itself.”