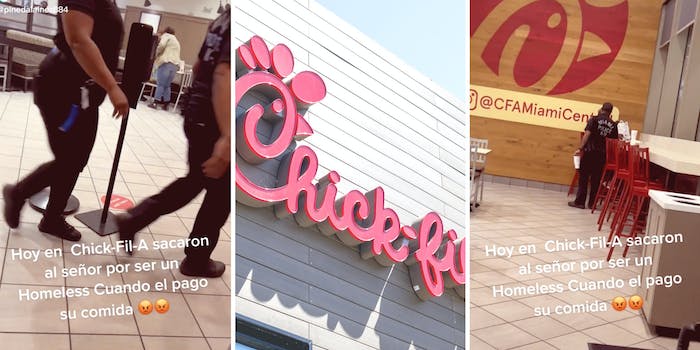 ‘This is so heartbreaking’: Chick-fil-A security kicks out unhoused man who allegedly paid for his own food and ate it in the corner

‘I would have said something.’

A viral TikTok shows a security guard removing a man experiencing homelessness from a Chick-fil-A, sparking debate in the comments.

According to a statement by the MiamiCentral Chick-fil-A, the franchise where the incident occurred, the man had previously “spit on guests” and had been issued a trespass warrant.

In the clip posted by TikToker Pineda Lainez (@pinedalainez884), the man was eating his meal at a table in the corner of the Chick-fil-A when the officer approached him and asked him to leave. The video amassed 344,000 views by Monday.

“This is so heartbreaking because he even chose to eat in the last seat, far away from everyone,” user @wendyseatingshow wrote, “If I was there I would have spoken up for him.”

“This is so wrong on so many different levels. They should feel ashamed for even doing something like that to a paying customer,” another user said.

Following the release of the clip, many viewers said they complained about how the incident was handled on Chick-fil-A’s social media pages. The TikTok has been posted several times in comments on the MiamiCentral Chick-fil-A Facebook page.

Some commenters, however, pointed out that the man may have been asked to leave for reasons separate from his housing situation.

“There must be something else going on. Police can’t take a homeless [person] out of a business unless they commit a crime. Something else is missing here,” user @uzielgomez49 wrote.

“Tell the whole story. Nobody kicks a paying customer out just for being homeless,” another user said.

According to a statement made on the Chick-fil-A Downtown Miami & MiamiCentral Facebook page, the man in the video was issued a trespass warrant at the restaurant.

“This person has previously spit on guests and is verbally hostile. Our goal is to keep all guests safe, hence the off-duty Miami Police officers we hire to secure our facilities on-site daily (no police were called),” MiamiCentral Chick-fil-A wrote. “We apologize for any misunderstanding and acknowledge that this situation does seem inappropriate out of context.”

The Daily Dot reached out to @pinedalainez884 via TikTok comment and to the Miami Police Department via email.