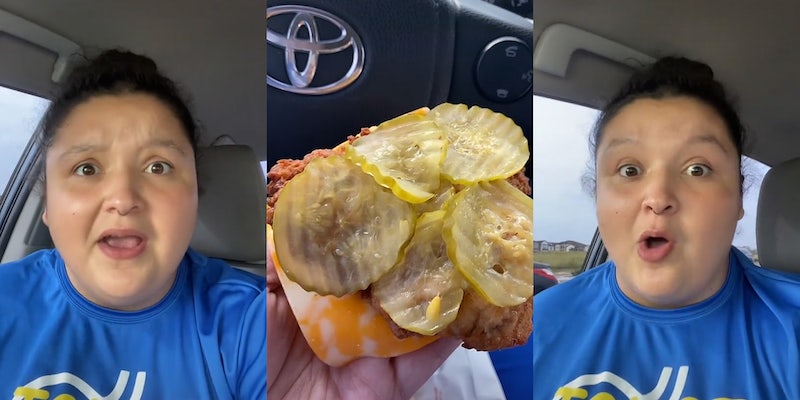 ‘In my opinion, Chick-fil-A was being petty’: TikToker criticizes how many extra pickles Chick-fil-A gave her, sparking debate

'Don’t complain if you get more than what you expected! you said extra pickles.'

A TikTok video went viral of a woman revealing the dozens of pickles Chick-fil-A added to her sandwich, sparking criticism in the comments.

The clip features only the TikToker Dezirae (@deesavagex) in her car at a Chick-fil-A.

After she picks up food and parks in the car, Dezirae reveals her sandwich, covered in pickles, along with several small cups of extra pickles, and some that she removed from the sandwich as well.

“Like, girl, I said extra pickle,” the TikToker says. “I didn’t mean give me your supply of pickles.”

As of Sunday, the video has been viewed over 467,000 times. However, there were people in the comments who criticized the TikToker for complaining about how many extra pickles she received.

“Don’t complain if you get more than what you expected! you said extra pickles,” one user said.

“Just say exactly what you want… don’t criticize over too little pickles or over too many pickles when they go out of their way to try to please you,” a third agreed.

Others stated how Chick-fil-A strives to satisfy its customers, sharing their own experiences asking for extra pickles.

“One time they gave me an entire container of pickles like the bowl they use for Mac and cheese,” one person shared.

“Ask for a side of pickles! They give you a little cup full. I get it for my husband all the time,” a second said.

“Everytime I ask mine for extra pickles they always give me an entire small soup cup filled with pickles lol,” a third stated.

In a follow-up video, Dezirae says she still firmly believes the Chick-fil-A workers were being petty, thinking two extra pickles wasn’t enough so they gave her a lot. Ultimately, though the creator notes that she was complaining about the boat load of pickles on her sandwich, she says she enjoyed it.

Chick-fil-A has a tendency to ensure customers get exactly what they want—even to an excessive point. In July, a TikToker named Ami Lynn accidentally ordered 10 slices of cheese due to a glitch in the mobile app. Well, Chick-fil-A delivered, giving her the whopping 10 slices of pepper jack cheese on her sandwich in a mac and cheese container.