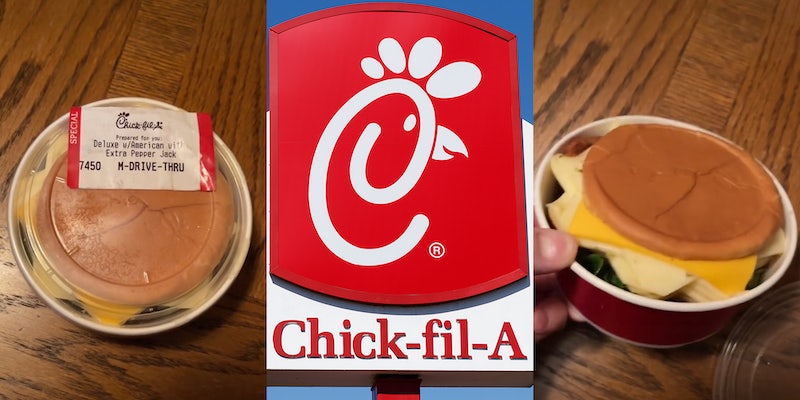 ‘I had this error happen but ended up with 30 chicken nuggets’: TikToker accidentally ordered Chick-fil-A sandwich with 10 slices of cheese, sparking debate about its mobile app

'They sure do not question your order and give you exactly what you asked for.'

In a viral TikTok video, a woman shares that she accidentally ordered 10 slices of cheese on her sandwich using the Chick-fil-A mobile app.

User Ami Lyn (@amilyn4) says the app appeared to glitch each time she tried to add a slice of cheese on her sandwich.

“I was using my app and wanted one piece of Pepper Jack cheese on my sandwich,” she says. “And I kept hitting it because it wouldn’t accept it, to find out it not only accepted it but gave me 10 pieces.”

Lyn removes the lid of the container, revealing the sandwich with 10 cheese slices. She then compliments the Chick-fil-A employee’s commitment to her accidental request. “Look at that craftsmanship,” she says. “10 slices of pepper jack. Hysterical.”

Her video has been viewed over 1.4 million times as of Saturday. In the comments, many viewers shared similar experiences when ordering through the Chick-fil-A app.

“This happened to me with the app and cheese cups I wanted one I got 8. I was wondering why the total was so much well I paid for 8 cups of cheese too,” one person stated.

“Same thing happened to me I accidentally got like 8 slices of tomato I opened up my Sand which like why did they do this to me,” another person wrote.

“I had this error happen but ended up with 30 chicken nuggets,” a third said.

“Last month I had the app glitch, I ended up getting five large fries for free,” a fourth shared.

Others argued that despite wacky requests, Chick-fil-A never questions an order.

“If there’s one thing about chik fil a they gonna give your exactly what you ordered,” one person said.

Lyn even replied to these comments, noting that the Chick-fil-A employees didn’t say anything about her addition of 10 cheese slices.

“They sure do… I thought for sure they would’ve at least tried to question the order… Lol,” Lyn responded. “Too funny… They sure do not question your order and give you exactly what you asked for… Lol.”