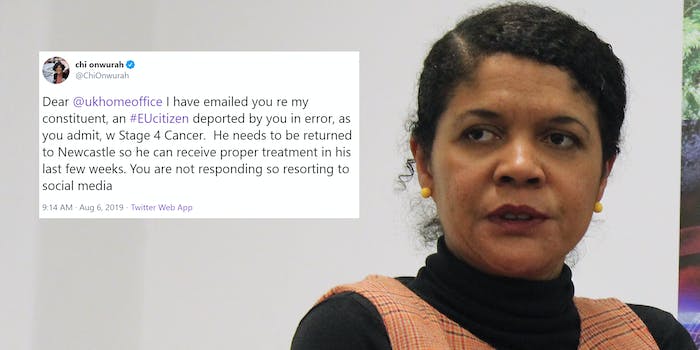 'My constituent cannot wait any longer.'

On Tuesday, the MP for Newcastle Central, Chi Onwurah, tweeted at the Home Office. Onwurah’s constituent, whom she leaves anonymous in order to protect his privacy, was wrongly deported to Lithuania, she tweeted. Though the Home Office has since recognized that his deportation was in error, it also refused to pay for his return to the U.K. until Thursday, she said.

Even worse: This man is dying.

Dear @ukhomeoffice I have emailed you re my constituent, an #EUcitizen deported by you in error, as you admit, w Stage 4 Cancer. He needs to be returned to Newcastle so he can receive proper treatment in his last few weeks. You are not responding so resorting to social media

He reportedly made his home in Newcastle for the last 10 years, meaning his family and entire support structure was based there and was also suffering from Stage 4 cancer.

With reportedly only weeks left to live and the period during which he would be well enough to travel decreasing, returning this man to his home and family was increasingly urgent. And as Home Office staff kept promising to take action only to allegedly fail to follow through, Onwurah took to social media in the hopes that the pressure of public attention might force the office to do something.

“For those asking why I am not talking to the Home Office through official MP’s channels rather than Social Media, we have tried that & been promised a response which has not come. Over the last 18 months Home Office response times have deteriorated, but my constituent cannot wait any longer. Like many MPs I am often  reluctant to publicise deportation cases in order to protect the privacy of the person concerned and  because there may be things we don’t know about in their history.  But for over three weeks now I have been asking the Home Office to bring back this terminally ill constituent or tell me why, without success,” Onwurah told the Daily Dot in a statement.

Though the Home Office initially responded vaguely to the Daily Dot’s request for comment with “[t]he individual is currently free to travel to and from the UK as an EU citizen,” Onwurah later shared that it would, in fact, pay for her constituent’s travel home. The pointed and viral tweets, it seems, made all the difference.

So pleased to give this update: Immigration Minister @SeemaKennedy has written to me to say @ukhomeoffice will pay to return my constituent to Newcastle – as a gesture of goodwill. Thanks to everyone who highlighted his case, such goodwill has been in short supply! https://t.co/jZhCM6rRCd

Reportedly, the problem that caused the man’s deportation was his lack of documents proving residency, a problem a great number of immigrant Britains have had in recent years—most notably the Windrush Generation. Invited from the Caribbean to help with labor shortage after World War 2, the landing cards that proved their date of entry, and that it was prior to the cut off point in 1971, were destroyed by the government in 2010.

Apparently, main issue was my constituent did not have documents to prove his residence in the UK. This is often the case – see #windrush! But the important thing is my constituent is coming home to be w loved ones for the last week's of his life. Thanks again for every retweet!

As something as simple as subletting a flat can result in insufficient documents for proof of residency, and the fact that prior to Brexit EU citizens had no reason to believe they’d need such documentary proof, we may be seeing a rise in cases in the coming years.