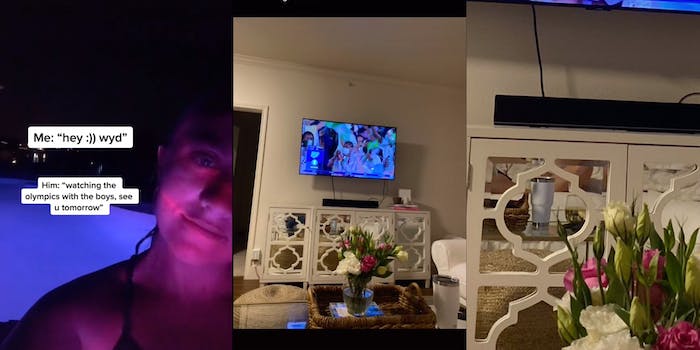 'Do I have dumb written on my forehead.'

A woman on TikTok shared some odd details that she spotted in the photo her “boyfriend” texted to her while supposedly watching the Olympics “with the boys.” She thinks he cheated on her.

What he didn’t realize was how much else the picture showed.

Megan-Marie shared zoomed-in versions of the picture, revealing what appeared to be a woman’s knee reflected in the mirrored cabinet below the TV. She pointed out several additional details, including a glass of red wine, a hydro flask, a book about the history of Chanel and a large bouquet of pink and white flowers.

To Megan-Marie, these seemed to be clear signs that her boyfriend was cheating—or at the very least, lying about being with the boys.

The TikTok, captioned, “Do I have dumb written on my forehead,” and tagged #cheater, garnered over 600,000 likes and 2300 comments. Viewers are divided on whether Megan-Marie’s boyfriend is actually cheating on her.

“What a day to be single,” one viewer commented. Another said, “I can already hear the excuses.”

Others pointed out the lack of effort to hide the alleged cheating.

“Why wouldn’t he zoom in and send the TV alone… I have so many questions,” one user said.

“Pls man didn’t even try,” one user commented, while another said, “He really thought that would work too… who gave men the audacity to be so painfully unaware of themselves…”

Some folks tried to defend the boyfriend though, saying maybe there was a chance this was an innocent situation. Innocent until proven guilty, right?

“Maybe it’s his friend’s wife? Gf? Maybe?” one user speculated, although not sounding convinced themselves.

Another user said, “Hear me out: he’s at his guy friends house that has a SO.” But as another user pointed out in reply, “They’re sitting next to each other drinking wine.”

But then the story took an entirely different—almost disappointing—turn, when Megan-Marie shared a “story time” TikTok, further explaining what really happened.

Apparently, Megan-Marie met this man on the dating app Hinge, and they eventually made plans to hang out because it was going well. During a texting conversation, she asked him what he was doing, prompting the situation in the original TikTok.

When he sent the photo, Megan-Marie said “as a joke” for him to tell “the boys” she really liked “her TV stand.” He replied, “she said thanks.”

It’s unclear from the story time who the Hinge man was with at the time, but Megan-Marie said it was no big deal. But she posted the footage on TikTok anyway, knowing it would “blow up.”

Then she and the man went on a date the next day, apparently joking about the story and the TikTok together. She said that they had more plans to see each other that week.

In an ending statement that didn’t clarify much, Megan-Marie said, “So yeah, that’s what happened. He’s not a piece of trash like everyone is saying. It’s just funny.”

Story time left more questions than answers for some viewers.

“Why are you still hanging out with him?! This is confusing,” one person commented. Another said, “He lied initially.. That’s the red flag you’re ignoring.”

Megan-Marie did not respond to the Daily Dot’s request for comment.