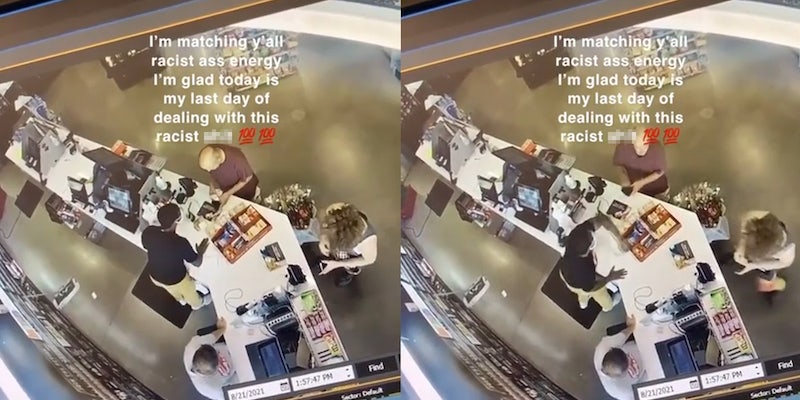 'I'm glad today is my last day of dealing with this racist sh*t.'

A viral video on Reddit shows a store cashier slapping a customer after the customer called him a “Black motherf*cker.” The cashier noted in text overlay on the video that he was “matching (customers’) racist ass energy” and that it was his last day on the job.

The video was posted to Reddit’s popular r/PublicFreakout page by u/taylor2121 and has over 35,800 upvotes. A portion of the overlay caption, from the employee reads: “I’m glad today is my last day of dealing with this racist sh*t.”

As the Black cashier is checking out the older white man, the cashier quickly gives the customer back his change.

The white man can be be heard saying, “Hey, don’t throw my money at me … you black motherf*cker.”

The cashier replies, “Whatchu say? I’m what? Black what?”

The cashier reaches over and slaps the man.

“Don’t you ever call me a Black motherf*cker!” the cashier says. “What’s wrong with you, bro? Watch your mouth.”

It’s unclear if he lost his job as a result of the incident or if he knew it was already his last day prior to the incident. It’s also unclear where the video was originally posted or where the incident took place.

Viewers on Reddit called the slap “epic.” “I’m impressed with that slap cause it came through pretty clear in the audio,” one said.

“Slapped back to reality,” another wrote.