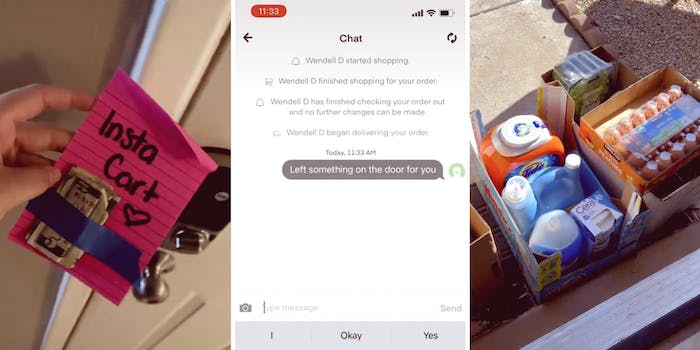 ‘I wish more people would do this’: TikToker leaves cash tip for Instacart driver, sparking debate

A video showing a woman tipping her Instacart driver in cash has garnered 286,300 views on TikTok, prompting a discussion about tipping through the grocery delivery app.

“We don’t talk about taxation,” the video is captioned. A snippet of the song, “We Don’t Talk About Bruno” from the Disney movie Encanto plays over it. The video also shows the poster, @blanquitaflorr, sending her Instacart shopper a message letting them know that they have a tip taped to their door.

One commenter wrote that they always tip in cash but fear having their order ignored—a common theme in viral videos on the subject.

“I tip very well in cash but when they see that zero tip on the app I have a feeling a lot of them deny the order,” the commenter wrote.

However, @blanquitaflorr said she tipped both in-app and in cash, so that her order would be selected and her shopper wouldn’t be taxed on their full tip.

Similarly, another commenter expressed a desire to do something like this for their DoorDash deliveries, but worried that seeing a zero tip in the app might be a deterrent to pick up their order.

“I wish I could do this (with) DoorDash but I’m so scared they’ll think I’m not tipping and be mad at me or not take the order,” they wrote.

Another commenter wrote that they were doing something similar, leaving a tip at their door with a sign designating it for their Instacart shopper, but that shoppers didn’t seem to want to take it. When @blanquitaflorr asked the commenter if they knew it was for them, the commenter replied in the affirmative.

“Yeah, and I usually say something in the delivery instructions thing,” they wrote.

Delivery workers in the comments appeared to appreciate cash tips, with one saying, “I wish more people would do this.”

One Instacart driver explained why they like cash tips, stating “As someone who does instacart i love cash tip better then tips on the app sometimes they take money from us when we refund a few items due to outstock.”

The Daily Dot has reached out to Instacart directly regarding its tipping policy.

Update 10:33am CT Jan. 20: @Blanquitaflorr declined to comment on this story.