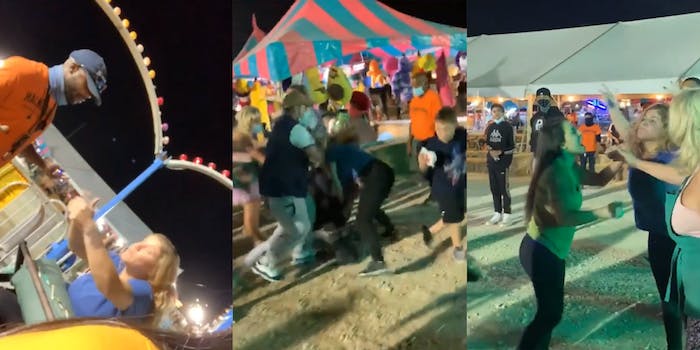 She called the Black ride attendant an 'animal.'

A video shared to Reddit on Sunday shows a woman dubbed a “Karen” getting booted from a carnival ride and getting into a physical altercation with other riders.

The video starts during an argument, where it appears that a ride operator at a Halloween Town Pumpkin Patch in Las Vegas has had enough lip from the woman urging him to start the ride. The employee had secured other riders, and the woman, who is sitting with a young boy, decided she had waited long enough.

Believing she was combative, the operator says no one is riding until the woman exits the ride. She insists that her tone wasn’t negative and that she was only “excited” about the ride. “I don’t wanna hear nothing until she gets off the ride,” the operator says.

The woman asks what she did wrong. The operator replies, sarcastically, “If I don’t know, and you don’t know, then nobody knows.” As she continues to plead her case, he says, “It has been no problem until you got on the ride today.”

Then the name-calling starts. “You guys can thank her for acting like a damn animal,” the operator says. “Well, you look like an animal,” the woman says.

The woman proceeds to make a phone call to complain about the operator, but it’s unclear who she’s speaking to. The ride operator, meanwhile, is having none of it and asks everyone to exit the ride. He tells the woman and their group that they can get their money back at the ticket office.

Eventually, the passengers head out, but along the way, the woman gets into a dispute with another patron. The beef quickly turns into a barbecue as people from all directions throw hands.

A young man jumps in and punches a young woman. This wasn’t taken lightly by another man, who grabbed him by the throat and tossed him around. The woman eventually ends up fighting on the ground.

Redditors questioned why people are even attending carnivals, given the state of the world. “There’s a pandemic on and people are actually still going to these things, its nothing but trash,” commented u/jimmyray01.

COVID-19 outbreaks aside, the woman’s behavior garnered the most comments, with many speculating about why the young boy with her remained calm.

“That lady’s kid barely reacted to anything during the whole video,” wrote u/tophunnit. “Something tells me this isn’t the first time he’s seen this song and dance from Momma.”