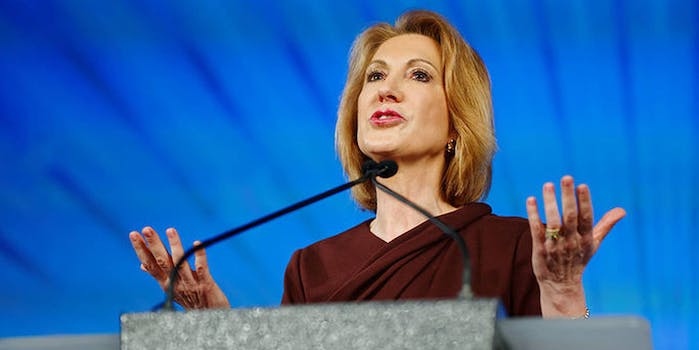 Photo via By Michael Vadon/Wikimedia Commons

Carly Fiorina for Vice President site has a hilarious redirect

It’s only been one day since Carly Fiorina was named Ted Cruz’s running mate—and she’s already doing so much for American women.

Go to CarlyFiorinaForVicePresident.com and you’ll be redirected to, surprise, a donation page for the Planned Parenthood Action Fund.

The prankster is not yet known, but the message is clear: Why vote for the new Cruz-Fiorina ticket when you can support Planned Parenthood instead?

Though Fiorina self-defines as a feminist—“A feminist is a woman who lives the life she chooses and uses all her God-given gifts,” she has said—the former presidential candidate has long clashed with women’s health organizations like Planned Parenthood.

During an early Republican debate, Fiorina lambasted Planned Parenthood for the famous sting videos that later turned out to be admittedly fake collages of stock footage. In the videos, bemoaned Fiorina, she saw a “fully formed fetus on the table, its heart beating, its legs kicking, while someone says we have to keep it alive to harvest its brain.”

In a statement on its website on Wednesday, Planned Parenthood Action Fund called the Cruz-Fiorina ticket “an echo chamber of lies.”

“Her campaign also was based on an anti-women’s health platform,” the statement continued, “that would have serious consequences for women’s ability to access affordable birth control and reproductive health care.”