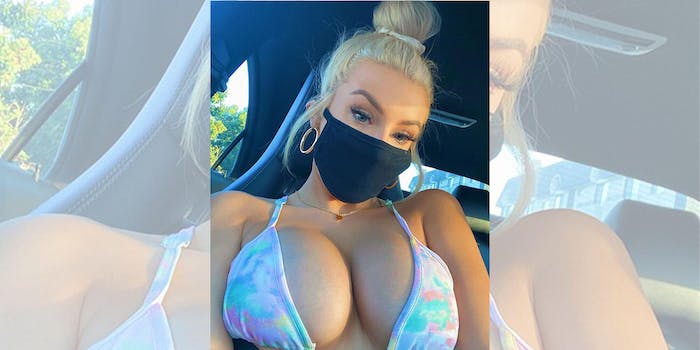 Is Tana Mongeau about to join OnlyFans? Her fans seem to think so

The speculation comes after some cryptic tweets.

Tana Mongeau‘s fans are speculating that the YouTuber might be joining OnlyFans soon after some cryptic tweets.

“Ok something big is coming tho,” she teased again on Monday.

Her followers swarmed the comments of both tweets with rampant speculation. “If this is an OnlyFans,” someone tweeted with eyes emoji.

Another said that while they have never paid for an OnlyFans subscription, they “plan on spending hella” money on Mongeau’s potential content. (OnlyFans allows creators to charge a monthly fee for access to their adult content.)

This speculation comes after her long-awaited 4:20 special, which she dropped on April 30. In the video, she teased the potential switch to x-rated content.

“4:20 special is FINALLY COMING TODAY. sorry guys. i had to take some stuff out cause youtube woulda exiled me fr on this one,” Mongeau tweeted. “i rly do need a place for uncensored content…. hmmmm. AHHHH I LOVE THIS VIDEO THO. get ur blunts or backwoods or whatever the f*ck ready.”

Mongeau is no stranger to posting near-NSFW photos on her Instagram. “OnlyFans: but it’s just you being yourself,” one fan tweeted. “Girl, OnlyFans. You don’t even have to charge us,” another said.

Mongeau’s YouTuber peers have joined OnlyFans or stirred speculation, too

Life & Style suggests the influencer is considering creating an account so that she no longer has to worry about Instagram and YouTube demonetizing her posts. She won’t be the first YouTuber to start an OnlyFans page. Fellow YouTuber Lena The Plug, who is also an OnlyFans content creator, responded to Mongeau, writing, “welcum,” along with the purple devil emoji. Trisha Paytas already has over 130 posts on the site, and Mongeau’s “ex-husband,” Jake Paul, seemed to hint at also creating an account. He posted a nude—which he later deleted—to Instagram with the caption: “3 million likes and I’ll make an only fan.”