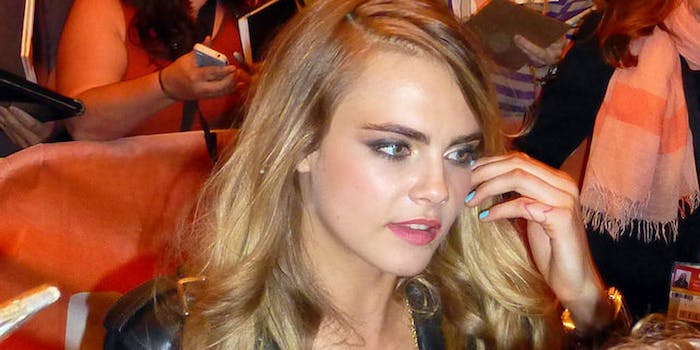 If only all queer celebs would be so open about their same-sex relationships in the media.

Cara Delevingne—she of those eyebrows—is not your typical fashion icon. She’s short (for a model), a scrappy tomboy, and she makes fugly faces in candid photographs. With more than 14 million followers on Instagram and nearly 3 million on Twitter, the model turned actress has an obsessive following unmatched by anyone else in the fashion industry.

But what really sets Delevingne apart from the fold is the fact that she’s never shied away from being 100-percent herself. For one thing, she’s never hidden her relationships with women.

In an interview published today, Delevingne told a Vogue writer that even she has struggled to be comfortable with her queerness, that “she felt confused by her sexuality as a child, and the possibility of being gay frightened her.”

“It took me a long time to accept the idea, until I first fell in love with a girl at 20 and recognized that I had to accept it,” Delevingne told Vogue.

“I think that being in love with my girlfriend is a big part of why I’m feeling so happy with who I am these days,” said Delevingne, referring to her relationship with musician Annie Clark, who performs under the name St. Vincent. “And for those words to come out of my mouth is actually a miracle.”

While the openness about being queer is extremely refreshing, Vogue writer Rob Haskell took an oddly dismissive stance toward Delevingne’s sexuality, writing: “Her parents seem to think girls are just a phase for Cara, and they may be correct.”

Haskell continues on to frame Delevingne’s romantic relationships with women as some kind of pathological response to a troubled childhood and a mother who was addicted to heroin, by Delevingne’s own account.

“When I suggest to Cara that to trust a man,” wrote Vogue reporter Rob Haskell, “She might have to revise an old and stubborn idea of hers—that women are perennially troubled and therefore only women will accept her—her smile says she concedes the point.”

The interview hasn’t gone over well with queer writers on the Internet. Lesbian pop culture writer Trish Bendix of After Ellen called the interview “mansplaining,” suggesting that “Cara deserves better from a magazine like Vogue.”

While the dismissive tone of the piece is a letdown, part of what’s refreshing about Delevingne is that she makes no effort to hide her confusion—not just about sexuality, but about drugs and alcohol, mental health, learning disabilities, and feeling out of place in the upper-crust British society in which she was raised. She refers to relationships with both men and women in the interview, but she makes no attempt to define her orientation.

The public eye is only going to focus on Delevingne even more, as her first major film role hits theaters in Paper Towns on July 24. She’s already stacking up the film roles beyond the hit teen romance, playing a “homicidal witch” in the upcoming DC comics release Suicide Squad.