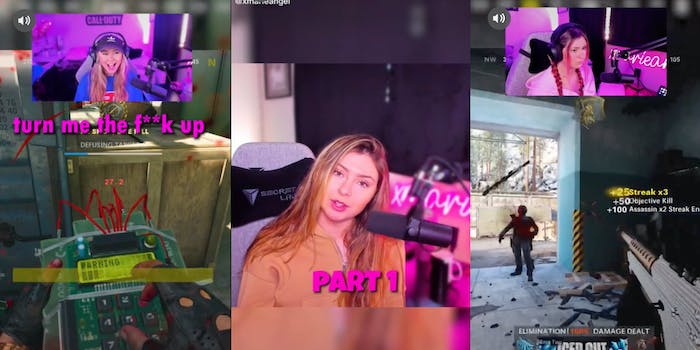 ‘I would cry’: TikToker records the misogynistic comments she receives while gaming

A female gamer is uploading TikTok videos revealing the misogyny she experiences when playing Call of Duty.

In a six-video series to her account, the gamer, Marie, captures the exact moment male players realize they’re not playing with another guy. Each video has racked up millions of views.

“Why are you so cracked?” one player asks Marie during a game. The exchange is captured in the second video in Marie’s series.

“I don’t know,” she says in response.

In her third video, meanwhile, a player says that Marie’s “gotta be a fat bitch.”

“Ain’t no cute bitch that good at Call of Duty,” he says. “If you’re cute, I’ll be surprised.”

In the comments, viewers are shocked at the blatant misogyny.

“That’s why I stay muted because I would cry,” one woman wrote under Marie’s third video.

“Why is it still a THING for men that women don’t game?” another wrote under the same post. “Everyone plays some kind of video games now.”

But unfortunately, it’s not unique for women to face sexism in the gaming industry. A 2012 study from the University of Ohio found that a Halo 3 player received three times the harassment for using a female-identifying profile than a male one.

Thankfully, TikTokers seemed more focused on Marie’s skills than her appearance and gender.

“They ain’t lying when they say u a different breed,” another commenter wrote.