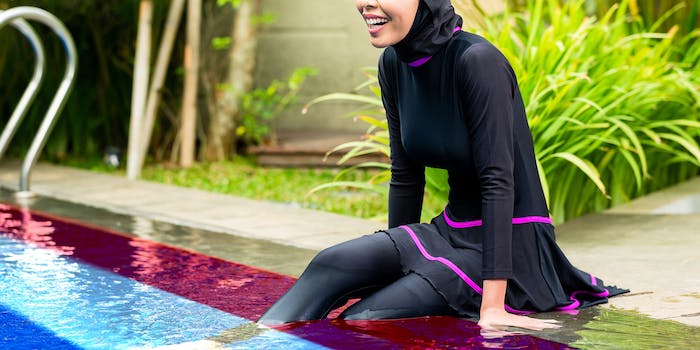 However, one French mayor is already refusing to comply.

After international outcry, France’s Council of State has overturned the ban on “burkinis” in the southern coastal town of Villeneuve-Loubet.

Outrage over France’s enforcement of the ban grew after photos circulated online showing police forcing a Muslim woman, wearing a long-sleeved shirt and a head covering, to disrobe on the beach. Though this woman was not technically wearing a burkini, or a full-body swimsuit with a head covering, a ban on the clothing had been issued in beach towns across the south of France, citing French secularism and the idea that women are being forced to “hide their body,” ignoring that many woman may choose to cover up.

The top French court’s ruling is expected to affect similar burkini bans in about 30 coastal beach towns. But as USA Today reported Friday morning, at least one town’s mayor is already refusing to comply—saying police will continue to ban the burkini.

“Here, the tension is very, very, very strong, and I won’t withdraw it,” Ange-Pierre Vivoni, the mayor of Sisco on the French island of Corsica, said of the not wanting to lift the ban.

“By overturning a discriminatory ban that is fueled by and is fueling prejudice and intolerance, today’s decision has drawn an important line in the sand,” said director John Dalhuisen, according to USA Today. “French authorities must now drop the pretense that these measures do anything to protect the rights of women. Rather, invasive and discriminatory measures such as these restrict women’s choices and are an assault on their freedoms of expression, religion and right to non-discrimination.”

Women’s and Muslim rights advocates celebrated the decision on Twitter.

So glad that Burkini ban is being lifted at least somewhere in France. Literally how can you penalize a woman for covering herself?

Burkini ban lifted in France, but don't let that stop you men from telling women how to dress. #burkini

The ban on the full-coverage swimsuit was a recent addition to years of French laws banning religious Muslim dress. The country imposed a federal ban on public wearing of the burqa and the niqab (a face-covering veil) in 2011. French citizens appear divided on the bans—with some advocating for total French secularism while others say the bans go against France’s founding motto of liberty, equality, and fraternity.

Many say the arguments for “secularism” are thinly-veiled expressions of Islamophobia: a growing sentiment of fear and hatred against France’s Muslim population related to recent terrorist attacks in Paris.