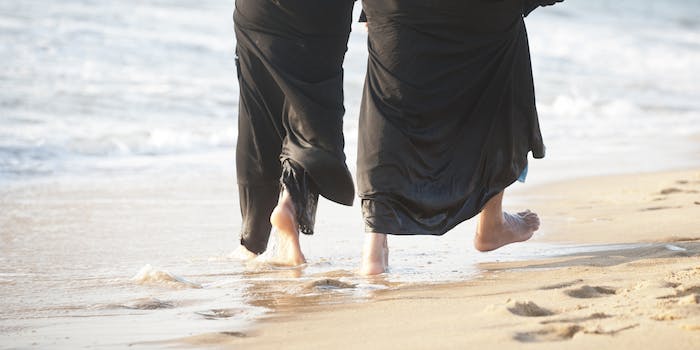 She wasn't even wearing a burkini.

In three beach towns in the south of France, mayors have banned women from wearing “burkinis”—aka full body swimsuits with head coverings often worn by Muslim women—from its beaches. Though they cite French secularism and the idea that women are being forced to “hide their body” unfairly, the laws instead allow the government to dictate what is appropriate for women to wear.

This is no more apparent than in photos of French police surrounding a woman wearing a long-sleeved shirt and a head covering on a beach, and forcing her to strip.

Many online were horrified at the photos, saying no matter what French lawmakers say, it’s yet another example of men telling women how they should dress.

So just to be clear – we aren't talking about a "burkini ban" – we are seeing this discriminatory law for what it is: a Muslim female ban.

Note that she isn't even wearing a #burkini – the one piece full body swimsuit. She's just …wearing clothes. pic.twitter.com/g6V2ToIyPW

Why is a nun allowed to cover and a Muslim woman who chooses to do the same forced to strip? #burkini #France

In an op-ed for the Guardian, Aheza Zanetti, the inventor of the burkini, slammed France for their actions. She says she invented the garment to give Muslim women the freedom to play sports without worrying about what they were wearing. “This has given women freedom, and they want to take that freedom away? So who is better, the Taliban or French politicians? They are as bad as each other.”

To put it simply, men oppressing women is an issue everywhere, in all religions and cultures and countries. There are women who feel forced to wear burqas, just as there are women who feel forced to wear modest clothing for Christianity, and those who feel it’s necessary to wear revealing clothing for male attention. Removing institutional and societal pressures so that women can freely choose what to wear based on their own beliefs is an important goal. But that’s not what’s happening in France.