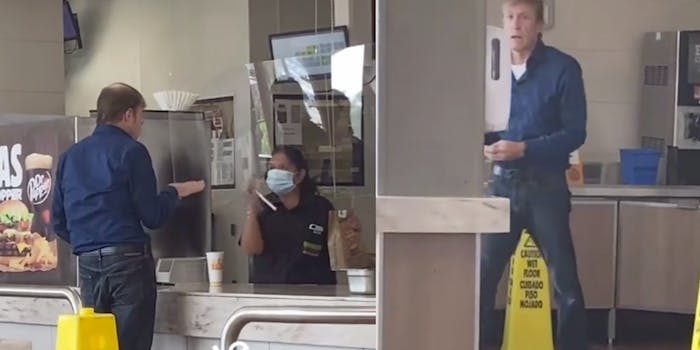 Customer stands up for Burger King employee against anti-masker

The anti-mask customer seems to have an internal freakout upon noticing he's being recorded.

A bystander at a San Diego Burger King filmed a customer who approached the register without a face mask.

According to the video, which was filmed on TikTok Thursday, the customer and a Burger King employee appear to be having an altercation. Soon after, the bystander tells the employee not to serve the customer.

It is implied that the customer was trying to invoke his status as a U.S. citizen to get food at the restaurant despite not wearing personal protective gear during a global health pandemic.

“Don’t give him food when he’s saying he’s a citizen, since he’s treating you like that, tell him to fuck off,” the bystander tells the employee.

“It has nothing to do with her citizenship, asshole,” the bystander continues. “What a jerk.”

As the man leaves the restaurant, he appears to have an internal freakout upon noticing he’s being recorded.

It’s not immediately clear why the man and employee were arguing with each other. In several states, including California, patrons must wear face covering when in public spaces and when social distancing is not possible.

On Twitter, several users commended the woman who spoke up on behalf of the employee.