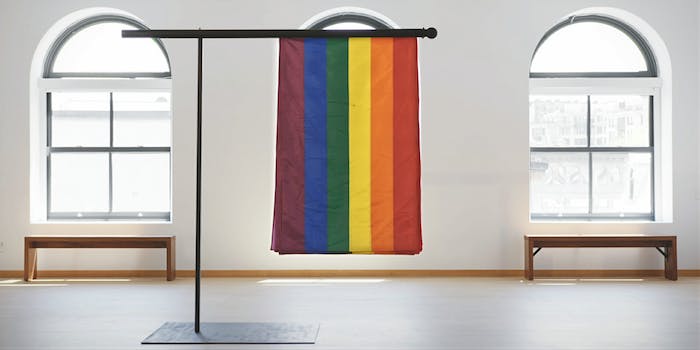 It was designed for International Day Against Homophobia, Transphobia, and Biphobia.

Violence is on the rise against the LGBTQ community. In 2016 alone, the U.S. saw a 20 percent increase in hate crimes, and in 2017, anti-LGBTQ murders rose by over 80 percent. Worldwide, LGBTQ acceptance remains more polarizing than ever, with a 2018 study pointing out that the most anti-LGBTQ countries are only becoming less inclusive.

But one LGBTQ initiative is taking a stand against homophobic, biphobic, and transphobic violence with a powerful message for the queer community. Meet the Pride Shield, the only bulletproof LGBTQ flag in the world.

Created by Canadian creative agency Rethink Canada for the LGBTQ non-profit the Émergence Foundation, the Pride Shield includes 193 flags, representing every single country in the United Nations. The flag was designed specifically for today, the International Day Against Homophobia, Transphobia, and Biphobia, which highlights “violence and discrimination experienced by LGBTI people internationally,” according to the day’s official website.

In a promotional video for the flag obtained by the Daily Dot, a bullet slices through multiple rainbow flags hanging in midair before the Pride Shield catches it and it falls to the ground, representing how humanity can take a stand against LGBTQ violence by unifying worldwide.

“We created this flag to show the world that together we can stop violence,” text in the video reads. “It’s made out of 193 pride flags, one for every country in the world.”

Xavier Blais, a founding member for Rethink’s Montreal agency, told the Daily Dot that the Pride Shield was designed as a “fresh take” on LGBTQ rights, one that stood out and highlighted an important issue impacting the community.

“The idea came about when watching reports about Pride parades around the world,” Blais explained to the Daily Dot. “This made us realize that in some of the biggest countries in the world, most people can’t even show their colors.”

The shield took about two weeks to create, and creating the ballistic installation from the shield’s promotional video took time, because “it had to be poetic” and “not about raw violence.” The installation itself weighs about 250 pounds, easily making it one of the heaviest pride flags in the world.

As for the flag’s message, Blais quotes a translation from a French Facebook comment that the team’s video received.

“‘Alone, we’re fragile. Together we’re indestructible. Solidarity between LGBTQ individuals from all nations and through all minorities is key to a world where everyone respects diversity,'” Blais quoted to the Daily Dot. “That’s the exact thing we wanted to convey: On all specters of sexual orientation, race, and gender identity, if we all show our pride and stand together as humans, hopefully, everyone can live the life they want.”

After today, Rethink and the Émergence Fondation will begin bringing the Pride Shield to public spaces, creating a discussion about the flag, its meaning, and the larger sociocultural problems that sparked its creation. LGBTQ organizations can even order the installation, too. In the meantime, the flag has already been in Montreal’s Centre Phi, and Rethink wants to continue showcasing it in “other safe spaces where people will treat it with respect.”

“We feel privileged to live in a country as accepting as Canada,” Blais said. “We hope that this drop in the ocean will make a tiny dent [for] global acceptance for all.”

For more information on the Pride Shield and its creation, head over to its official website, which features statistics on LGBTQ rights around the world and testimonies from queer people who faced persecution in their home countries.