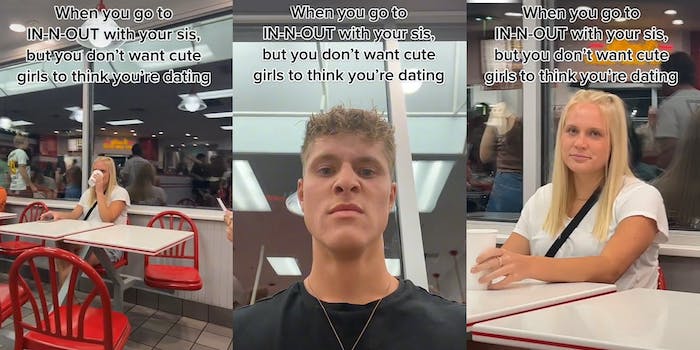 A video of adult siblings sitting apart at an In-N-Out Burger in Utah went viral after the brother made his sister sit on a separate bench from him so that people don’t think they’re dating.

Queued to the sound of Double A-Ron’s and Jdillion’s “Walk Around,” the video posted on June 1 shows TikTok user @cadenjake1 recording himself and his sister sitting away from each other. Text on the video says, “When you go to IN-N-OUT with your sis, but don’t want cute girls to think you’re dating.”

The video garnered over 795,300 views since it was posted, but some viewers in the comments aren’t sure what the TikToker did was necessary.

“I hope this is just a joke bc this is genuinely sad and pathetic if not,” one user commented. Another wrote that “there’s no way this would happen u look like twins.”

The user’s sister also joined in.

“How about you just spend time with your sister?” she wrote.

Others commented that sitting away from their siblings in public is normal.

“Never seen anything so relatable,” one user commented.

“Bahaha my brother does the same thing!” another user said.

Some commenters offered advice: “The key is to talk about ‘mom and dad’ loudly,” one user wrote.

The Daily Dot reached out to the siblings via Instagram messages and TikTok comments.