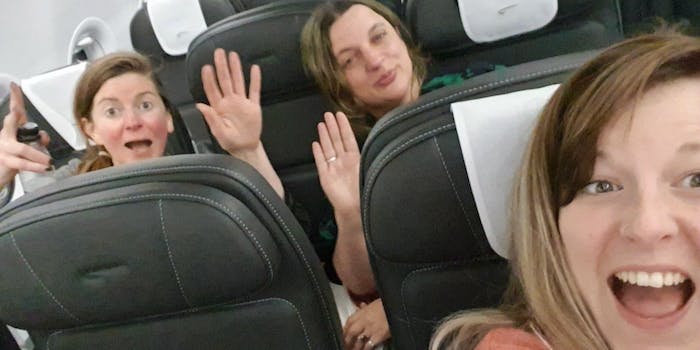 She staged a 'maskless standoff' at the airport.

A British Karen was dragged on Twitter after sharing a maskless airplane selfie and bragging about staging a “10 Brit maskless standoff” at the Berlin Airport.

The Karen in question was Charisse Burchett, who caught a flight from Berlin to London last week and apparently refused to comply with the airport’s mask mandate.

“Police and authorities could not make us wear our masks,” Burchett captioned her Twitter selfie, which included two other maskless women on the plane. “I love this cheeky photo.”

“Cheeky” was not quite the word that British Karen’s Twitter critics had in mind for her selfie or airport behavior, which they argued could have endangered other travelers.

“Imagine being so selfish AND so self-absorbed as to advertise it,” @HeathertheHeron tweeted at Burchett. “I don’t like naming/shaming but in this instance I might make an exception. C’mon Twitter, at least find out which community they might be infecting?”

Burchett faced a myriad of similar criticisms, in response to which she doubled down on her anti-mask stance. She told @HeathertheHeron that she was in Berlin “supporting the Drs speaking up against the lies being told to you” and linked to a video from the World Doctors Alliance, a cult of coronavirus-denying doctors and other healthcare professionals that advocates the ending of all pandemic-related lockdowns.

It should come as no surprise that British Karen is an outspoken anti-vaxxer across the board. Her Twitter bio reads: “A rebel not a slave – Vaccines are harming and killing our children. vaccines cause autism and cot death.” Her bio also links to The Richie Allen Show, a U.K. podcast that has welcomed several far-right and anti-Semitic conspiracy theorists over the years, including British Holocaust denier Nick Kollerstrom.

Burchett also demonstrated a preoccupation with Nazi Germany in her replies to other critics, telling one Twitter user that she was “standing up to the Gestapo” and calling lockdowns “the start of fascism.” She responded to another critic with a text post that read, “If you’ve ever wondered whether you would have complied during 1930s Germany, now you know.”

But British Karen reserved arguably her most heinous response for Twitter user @MrsShave, who wrote, “My 3 year old daughter had to wear a mask bolted to a table to have 33 rounds of radiotherapy to her brain. And you couldn’t wear a mask for a short flight from Germany?”

“It’s a shame you allowed your child to receive such treatment,” Burchett responded. “I know a UK scientist in French jail for curing cancer. If you supported the freedom fighters like me then your Daughter could be cured..without radiating her. No money in cures am afraid.”