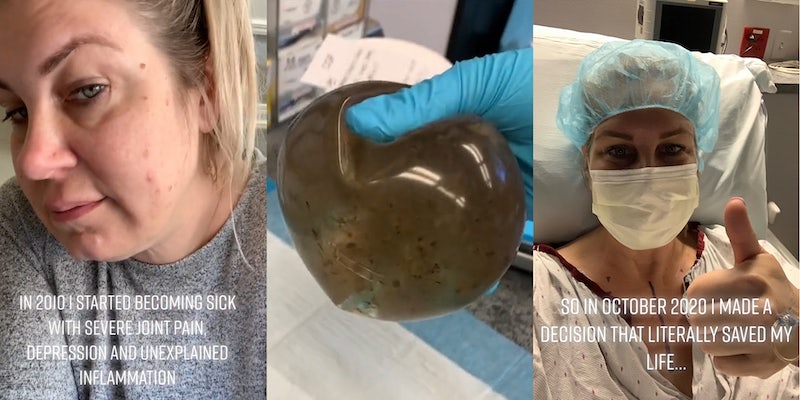 ‘This is your sign’: Woman says mold was found in her breast implant

This scattershot of symptoms has made the illness difficult to diagnose, with many people who have received breast implants telling stories of visiting multiple doctors before realizing their implants were the source of the issue.

In a video with over 5.3 million views, TikTok user Melissa (@melissalima713) tells her story. According to Melissa, she got breast implants in 2002 “because being in front of the camera made me insecure about my body.”

Eight years later, Melissa says she started to experience symptoms like joint pain, depression, and unexplained inflammation. She claims she visited hundreds of doctors, never finding the exact solution to her various issues. All the while, her symptoms worsened, she notes.

One day, Melissa says a friend told her about Breast Implant Illness. Melissa says she did some research and quickly became convinced. Soon after, she says she had her breast implants removed—a decision she says “literally saved [her] life.”

Near the conclusion of the video, Melissa reveals the implants that were in her body. While one appears clear as it’s supposed to, the other is brown with bits of particulate floating inside of it.

After her breast implants were removed, Melissa says her symptoms largely went away and she is back to “living [her] best life.”

@melissalima713 This is your sign. #breastimplantillnes ♬ CHANT (feat. Tones And I) – Macklemore

Melissa’s story is surprisingly common. Writing on the topic for Slate, author Eleanor Cummins noted that, “Over the past decade or so, more than 350,000 people in the U.S. have reported adverse events related to silicone gel breast implants to the FDA. Their complaints range from autoimmune symptoms to a rare cancer called breast implant–associated anaplastic large cell lymphoma.”

“Despite the number and severity of the issues described, the experiences of such patients have long been ignored by physicians, manufacturers, and regulators,” she continued.

Earlier in the year, another woman went viral on TikTok for sharing her explant story. TikTok user Bunnie’s video also documented implants filled with mold, which Bunnie alleged contributed to a series of health issues.

As for the fact that Melissa’s symptoms went away soon after the implants were removed, this too is a common experience. Melissa and Bunnie both reported feeling better after explantation, and Breastcancer.org writes that “In many, but not all cases, surgery to remove the breast implants improves or completely resolves the BII symptoms.”

In the comments under Melissa’s TikTok, users contributed their own stories about Breast Implant Illness.

“As someone who works in a pathology lab ive seen enough horror stories to keep me from ever getting them,” added another. “Scary stuff, glad ur better!”

“This happened to my friend,” offered a third. “She lived in pain for so many years. Once she got them out she’s healthy again thank goodness.”

Despite these claims, the Mayo Clinic noted on its website that “Both saline and silicone breast implants are considered safe for breast augmentation and breast reconstruction. Research on the safety and effectiveness of both types of implants is ongoing.”

Update 11:13am CT Sept. 16: In an Instagram direct message exchange with the Daily Dot, Melissa offered more insight into her situation. She says sharing her story on TikTok has already had a real-world impact.

“I went to Dr. Polsen [in League City, Texas] to make a follow-up video I will post this weekend, and when I was leaving the office, there was a woman in the waiting room that heard me talking to the receptionist about the calls she has been getting for appointments and she said ‘I’m here from your TikTok — I saw it and knew I had to come here,” Melissa says. “…The stories are becoming more and more common once women are aware of this.”

As Melissa is a TikTok Creator, she can earn money from her videos. That money, she says, is all going to a good cause.

“…Any money I make from this video is going towards someone’s explant. Someone that can’t afford it on her own,” she said. “That’s the least I can do.”