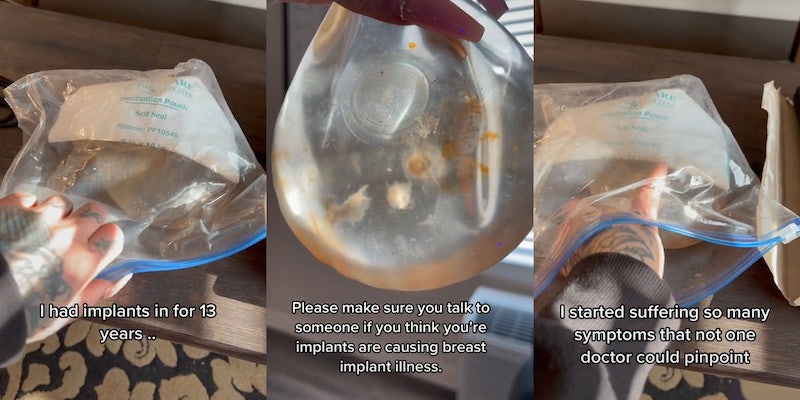 ‘That goes inside a human body. Look at the mold’: Woman shares what her breast implants look like after getting them removed

'No wonder why women are having so many complications with these things.'

A woman showed what her saline breast implants look like two years after removing them from her body.

The video, posted by popular TikToker Bunnie (@xomgitsbunnie), shows two implants that appear to have copper-colored stains on them, which Bunnie alleges is mold. Bunnie says she had the implants removed in 2020 after she suspected they were making her sick.

“I had implants in for 13 years,” Bunnie, who has 1.7 million followers, wrote in the text overlaying the video. “I started suffering so many symptoms that not one doctor could pinpoint. So I explanted in Nov 202 & it was the best decision I ever made! All symptoms went away, except anxiety sometimes.”

In the video, she shows her saline breast implants, which she says have “just been sitting” since she got them explanted.

“Look at that. That goes inside of a human body,” she says in the video. “Look at the mold. No wonder why women are having so many complications with these things. It’s disgusting.”

Bunnie states later in the video she suffered from an affliction called “breast implant illness.”

While breast implant illness is not an official diagnosis, it has become a catch-all term to describe the wide range of symptoms that many report after receiving breast implants. These are incredibly varied both in their impact on the body and how long after implantation the symptoms arise, making them difficult for doctors to diagnose.

“Some people develop symptoms immediately, while some develop them years later,” the website notes.

It is unclear whether the alleged mold visible in Bunnie’s video was a contributing factor to her illness, as it is unknown whether the mold developed before or after the implants were removed.

Regardless, there are multiple reports of mold developing in some breast implants. An article posted on the National Center for Health Research’s website states that “Although saline-filled implants are presented and regarded as the ‘safe’ option compared to silicon – containing only salt and water – they are rarely hermetically ‘sealed’. Moreover, their filling valves aren’t perfectly secure. As a result, they allow the body fluids of the user to infiltrate, along with bacteria, yeast and molds.”

In 2014, a Florida woman went viral after showing mold development in one of her saline breast implants. She claims this moldy implant caused her to gain weight and impaired her memory.

“Sores grew all over her body and she bruised easily. She felt lethargic and tired all the time, and even speaking became difficult, as it hurt and her voice grew [hoarse] and raspy,” Daily Mail reported in 2015. “For eight months, she couldn’t speak at all, communicating only via text message and Lightboard.”

While this woman reportedly suffered long-term symptoms, Breastcancer.org notes that symptoms of breast implant illness tend to disappear soon after implants are removed.

On TikTok, many commenters shared similar stories to Bunnie.

“I have seen so many people getting explants over the past year bc they had been sick for years w/random things & it was all bc of implants,” one commenter said.

“One of my really good friends just had hers removed cause she was having so many symptoms from them she said she wish she never got them,” another said.

Even with these issues, the Mayo Clinic notes that breast implants are “considered safe.”

Nonetheless, Bunnie wrote in the text of her video that people should take notice if they think their implants are causing them problems.

“Please make sure you talk to someone if you think [your] implants are causing breast implant illness,” she wrote. “We don’t have to suffer in our quest for perfection babies.”