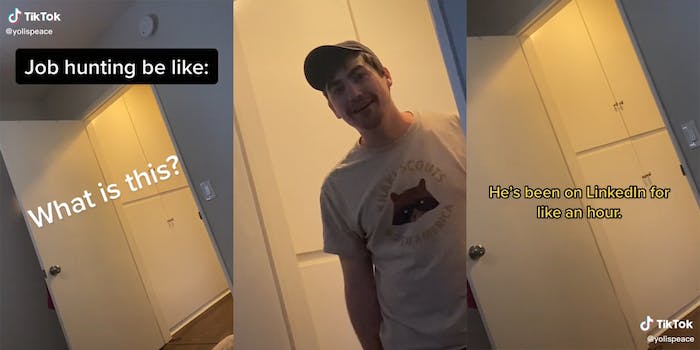 ‘Why did nobody tell me that I was supposed to be doing this?’: Man discovers LinkedIn, sparking debate about online networking

'I don't even know the people in my connections.'

A TikToker shared a clip of her boyfriend ranting about LinkedIn during the job hunt process, sparking debate in the comments about how useful the platform really is.

In the video posted by TikToker @yolispeace on June 22, her boyfriend asks from another room, “What is this? I genuinely, I don’t understand.” Text overlay reads, “Job hunting be like:”

“He’s been on LinkedIn for like an hour,” she explains in the clip.

“Why does everyone have 500 connections and I don’t have any? Like when did we start doing this?” her boyfriend asks, entering the room. “Why did nobody tell me that I was supposed to be doing this?”

When she asks how many connections he has, he says he has just “two,” including her.

The video is captioned, “He said, ‘Is this the new Facebook?'”

The video has reached over 84,000 views as of Wednesday, with commenters sharing their own struggles with gaining connections.

“I only have like 30 connections and it’s so embarrassing,” one user wrote.

“You’re supposed to have connections? I’m over here applying to jobs that have 857 other applicants in the last hour,” another said.

Others say that they don’t know many of the people in their connections, questioning how much LinkedIn connections matter on the job hunt.

“It’s alright. I don’t even know the people in my connections,” a commenter said.

“500 connections that we don’t even remember no worries,” another shared.

Several commenters also agreed with her boyfriend’s sentiment that LinkedIn is turning into the “new Facebook.”

“I cannot deal w the facebookization of linkedin. I saw 3 posts this week about peoples dead children. I CAME FOR WORK AND NOW I’M CRYING HERE TOO,” one user shared.

“Linked has very rapidly become the new Facebook except it’s people posting the most poetic corporate BS and adding anyone and everyone. I HATE it,” a second user agreed.

“You’re supposed to have connections on LinkedIn. What you’re not supposed to do is update your status like it’s Facebook. And that’s why it’s a joke,” another said.

The Daily Dot reached out to LinkedIn via email and to @yolispeace via TikTok comment.