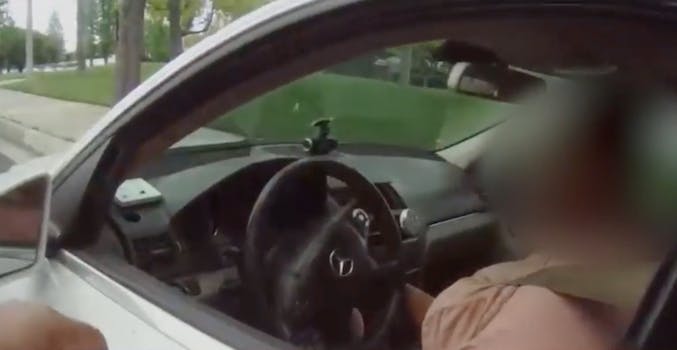 ‘You’ll never be white’: Black driver blasts Latino cop, calls him a ‘murderer’ after being pulled over for cell phone

Viral body camera footage shows a Southern California sheriff’s deputy being called a “murderer” and a “Mexican racist” for citing a Black woman’s cell phone use while driving.

The recent video, which surfaced Monday, shows a Los Angeles County Sheriffs Department Deputy pulling over a Black driver who then accuses the deputy of harassing her without cause on April 23 in San Dimas, California.

“Can you tell me why I’m being harassed today? Because I was going under the speed limit,” the woman can be heard asking in the video.

When the officer attempted to answer her question, she interrupted him, telling him that she was taking out her phone to record their interaction because he “is a murderer.”

“You can’t be on your phone while you’re driving,” the sheriff’s deputy, who has not been identified, told the woman.

The woman, who has also not been identified, asked the deputy if she was being “harassed” because he was giving her a cell phone ticket.

“This isn’t about harassment,” the deputy says in the body camera footage. “I am enforcing the law.”

At this point in the video, the woman informs him that she was recording him because he scared her, repeating that she believes he is a “murderer.”

“OK, well, I’m sorry you feel that way,” was his response.

She says that it is “not just a feeling,” that he is indeed a “murderer.” As the body camera video progresses and the deputy asks for her license, she says she left it at home and supplies a picture of it on her phone at his request. As she is zooming in on the image, she says she is a teacher.

After calling the deputy a “murderer” no less than six times, the woman tells the officer that he has threatened to kill her and her son, who is also in the car. No such threats can be heard in the video.

She then asks if she is being pulled over because he is “jealous” of her Mercedes. When another officer arrives and confirms that she is being cited for her cell phone use, she calls the first officer a “Mexican racist.”

“You’re always going to be a Mexican,” she says. “You’ll never be white. You know that, right?”

The LACSD issued a statement to the Daily Mail, indicating that the woman in the body cam video has filed a personnel complaint for “discourtesy.”

“We are aware of the video captured by one of our deputies. The person in the video filed a personnel complaint against the deputy for ‘discourtesy’ and an active inquiry is being conducted. Due to the active complaint, we are unable to provide further comment regarding the supervisory inquiry.”

This footage, according to the Fox News station that broke the story, was captured on a body camera purchased by the deputy himself, as the San Dimas office does not purchase them for its officers.

When the video made its way to the subreddit r/PublicFreakout, the deputy was praised for his handling of the situation.

“He is the epitome of patience,” u/STR1CHN1NE wrote. “Mad respect to this cop for holding his cool. He asked if it was her car to match the license plate in case it pulled up her brother or friend or someone she knew.”

Another user pointed out that while her fears may not have been entirely unfounded, it was still not an appropriate response.