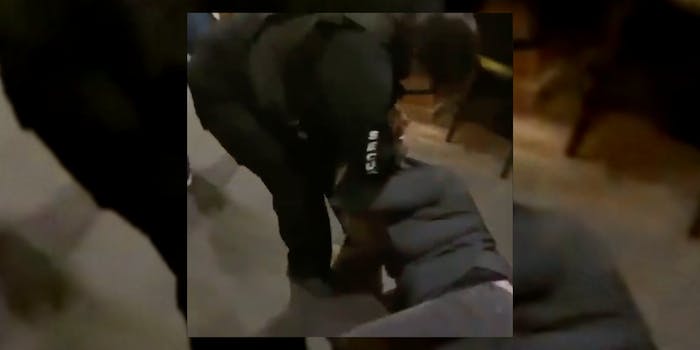 'She threw me down and dragged me across the bar on the floor like an animal.'

A shocking video out of Tennessee shows a woman being dragged out of a bar by her hair after reportedly refusing to wear a face mask.

The footage, captured at the Chattanooga Billiard Club, shows local resident Bliss Causby being removed by a female security guard following an altercation between the pair.

Causby, according to a post on her Instagram, says she began questioning the bouncer after bring confronted for not having a face covering. That’s when the security guard reportedly became “aggressive.”

“She threw me down and dragged me across the bar on the floor like an animal,” Causby wrote.

The bouncer is then accused of punching and kicking Causby, who claims to have kicked back in an attempt to break free. Causby was eventually helped up by a male friend before leaving the establishment.

“I should’ve called the police but was humiliated and hysterical and just wanted to go home!” she added.

Users on Instagram responded to Causby’s post with mixed responses. Some argued that the security guard’s actions were entirely unwarranted, while others expressed little sympathy given her apparent refusal to wear a mask.

“Play stupid games risking other people’s lives, get thrown out,” one user said.

Causby says she was not wearing a mask due to the fact that she was drinking at the time.

Speaking with WRCBtv, Causby says she suffered numerous injuries as a result of the encounter.

“Some hair was pulled out; my face was puffed and swollen,” she said. “My neck hurts. I had horrible bruises on my arm and my back.”

Neither the bar nor the security guard has publicly commented on the matter. Although Causby says she attempted to obtain surveillance video of the incident, the bar reportedly said it would only respond to a subpoena.

The Chattanooga Police Department are currently investigating the incident while Causby says she is in talks with a lawyer.