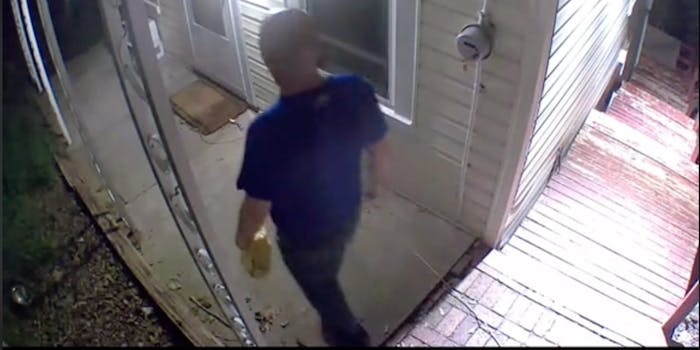 Video: Woman catches man lurking around her house in the middle of the night

He was ‘definitely NOT up to something good,’ one TikToker commented.

Thanks to a Blink home security camera, a woman was able to stop an intruder from possibly breaking and entering into her home in the middle of the night.

In a video posted to the TikTok account @creecher13, the woman says that, around midnight, she saw a strange man lurking around her home. She says she has never seen or met him before.

As he gets closer to her home, she begins talking to him through the security system. When she first says “hello,” it appears to catch the man off guard. He stumbles back and begins walking to another part of the house.

“I’m kinda lost. I don’t have a cell phone,” he said. “Can you tell me where I am?” He then mumbles to himself and walks away.

A moment later, the man comes back, having changed shirts and wrapped the first shirt around his fist. Many commenters warned that he likely did this because he was preparing to break a window and force his way inside.

He left, however, after the woman’s adult son and dog began making noise inside. The woman commented that she called the police shortly after. The police are reportedly still looking for the man.

In the comments, viewers expressed relief that nothing happened to the woman.

“He was planning on putting his fist through the glass!” one wrote. “You’re lucky your kid was home.”

“Now this was scary,” another wrote. “Definitely NOT up to something good! Stay safe.”