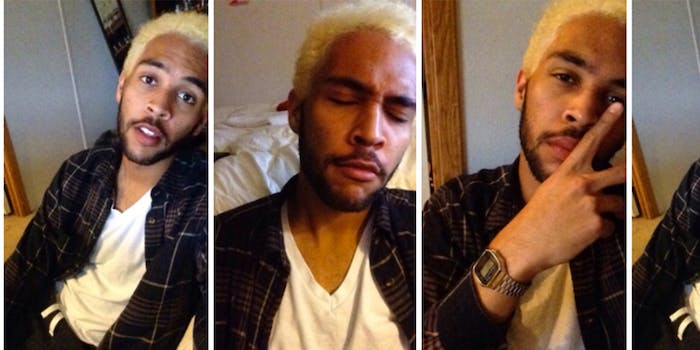 How #BlackOutDay is empowering people of color

#BlackOutDay encourages people of color to post selfies on Twitter. But trolls aren't too happy about it.

Selfies are going viral on Tumblr and Twitter, but these aren’t the typical Kim Kardashian Instagram selfies. The hashtag #BlackOutDay is taking over social media, with many members of the Black community posting fabulous and empowering photos of themselves. The campaign is an effort to “show that Black History is happening today, right now. That we are all Black History,” according to an official #BlackOutDay master post.

The campaign initially started on Tumblr, but has quickly spread to other social media networks. The guidelines are simple: If you’re Black, post photos of yourself. If you’re not Black, admire, reblog and retweet.

“We want people to see us now, we want people to see who we are. How far we have come. Basically we want to find out each other,” V. Matthew King-Yarde, one of the four organizers of the campaign, told the Daily Dot. King-Yarde launched the campaign on his blog, What Whites Will Never Know, along with fellow activists Marissa Sebastian, Nico Caldwell and Tumblr user expect-the-greatest.

Some selfies have already flooded Tumblr users’ dashboards, racking up thousands of notes. If you scroll through the tag, you’ll see a wide range of people posting their photos.

A crucial aspect of #BlackOutDay is about celebrating the diversity within the Black community and to help people feel confident about themselves. This is particularly important to those behind the campaign, in light of the fact that some of the most popular images on Tumblr are of users who embody European beauty standards.

The hashtag is bringing visibility to marginalized groups within the Black community, including people with disabilities and those who self-identify as LGBT. It’s also a boost of self-esteem for those who may not usually feel comfortable posting selfies on a site like Tumblr.

“Even though I know these people are out there, I don’t see them on an everyday basis,” King-Yarde says. “The thing is, [today] I’m seeing all walks of life.”

Tumblr / What Whites Will Never Know

Reactions to #BlackOutDay have largely been positive, but there’s been some opposition in the form of the hashtag #WhiteOutDay, in which white people are posting their own selfies on Twitter. But those trying to push back against the self-love and making of Black history are getting shut down by #BlackOutDay supporters, as well as King-Yarde himself.

“You know what people say, whiteout is what you use to fix mistakes,” King-Yarde says.

Christopher Columbus Day can be your #WhiteOutDay

GTFO with #WhiteOutDay – also help me, my eyeballs are once again stuck in semi-permanent sideeye

But what about other people of color who may feel left out by the hashtag? King-Yarde addresses that in the #BlackOutDay master post. He hopes that there might be spin-offs of the campaign, but he doesn’t want it to be totally appropriated by other groups.

“A spin-off is [if] you’re inspired by one movement to start your own movement. Co-opting is basically complimenting it and substituting,” King-Yarde says. “When you co-opt stuff it dilutes the message.”

While #BlackOutDay will likely no longer be trending tomorrow, it’s vital to remember the message that the hashtag delivers. Social media is allowing the Black community to take the reins of the narrative and share their stories. Black history is happening right now—and it’s in the form of selfies.