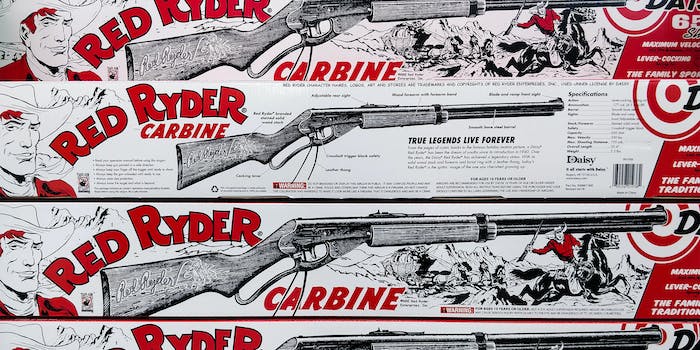 The student's father said the gun was only visible for a 'split second.'

A fourth grader in Louisiana was suspended from school for six days after a BB gun was visible in his bedroom during his virtual class session.

Ka Mauri Harrison, 9, was taking a test online when his brother walked into the room with the BB gun and placed it on a seat, making it visible to classmates, according to the Root. The teacher filed a behavior report to the school, saying the student “presented a weapon that appeared to be a rifle/shotgun during his Google Meets classroom session” and recommended that Harrison be expelled per school policy.

The gun could only be seen for a “split second,” according to the student’s father Nyron Harrison. The student returned to school on Thursday following the suspension, but his father said the incident will potentially have a lasting impact on the child’s future.

“They just went ahead and blew it out of proportion,” Harrison told local station WWL-TV. “This outcome is going to follow him through the rest of his life, and that’s what’s not allowing me to accept their decision.”

This incident also inspired others to point out the disparities in the public education system and how it criminalizes young Black boys.

Louisiana General Attorney Jeff Landry is launching a formal investigation on the matter, claiming that it was an “egregious incident” and a “blatant government overreach by the school system,” according to a press release sent Friday.

“I am investigating this matter and plan to take action in defense of this young man and his family and all families who could suffer the same invasion of their homes and constitutional rights,” Landry tweeted Saturday.

The National Rifle Association issued a statement on Twitter on Friday in support of the student and his family. “This is hysterical and irrational behavior by the school,” the organization said.