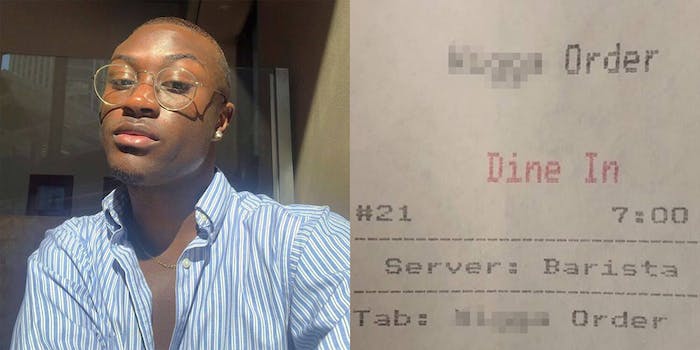 The server said co-workers sent him a food order with the N-word.

A Black man who works at an Arizona restaurant says his co-workers sent him a food order with the N-word on it, and his manager brushed it off as a joke.

Rakevion White shared a photo of the order receipt on his Instagram and Facebook accounts on Tuesday.

According to the photo, the receipt says “[N-word] Order,” and underneath the barista number and time, the phrase is repeated again.

White explained in the post captions that the receipt was sent his way on Oct. 22 at the Breakfast Club’s Cityscape location.

“Apparently this was a hysterical joke about myself that everyone including management thought was ok because the two employees were ‘Only joking,’” he wrote.

He said he has experienced far worse racist speech but that the level of disrespect he faced in this situation, and his co-workers’ lack of accountability three weeks later, is unacceptable.

“My employer allowed me to disrespected and humiliated by my co-workers,” he said.

Commenters expressed disgust over the racist receipt, and many offered legal services or recommended him to pursue legal action.

“I have a work attorney I literally just settled my case and I highly suggest you see him,” one user wrote.

Some commenters, however, sided with the man’s co-workers and agreed the offensive receipt was “just a joke.”

White did not immediately respond to the Daily Dot’s request for comments but told BuzzFeed News that since the incident, his hours at work have been reduced from 25 hours to about 18 hours.

BuzzFeed identified White as a 21-year-old student at Arizona State University who relies on his restaurant job to pay for school. He also said in his Instagram post that since the incident, he and other Black employees have not been allowed to serve as waiters which, as BuzzFeed pointed out, means he isn’t receiving tips anymore.

The Facebook page for Breakfast Club Downtown Phoenix is being trashed by users.

“Racist manager that enables his staff to be racially insensitive, its almost 2020,” one user wrote. “Get with the program!”

The Facebook page for the branch of the restaurant is flagged as an “unofficial page,” and a note says it was “created because people on Facebook have shown interest in this place or business.”

On Wednesday afternoon, a manager at the Breakfast Club’s CityScape location told the Daily Dot that employees were meeting about the incident but wouldn’t comment further.