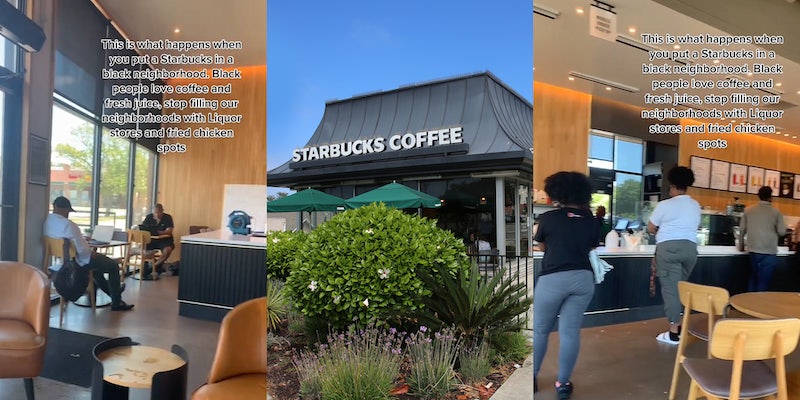 ‘We deserve luxury too’: TikToker shows a thriving community in Starbucks in a Black neighborhood

'This is what happens when you put a Starbucks in a Black neighborhood.'

User @ambijay_ posted a now-viral TikTok video showing the inside of a thriving Starbucks location in a Black neighborhood. As of Monday, her video has received about 747,000 views on the social media platform.

“This is what happens when you put a Starbucks in a Black neighborhood,” the video’s on-screen text says. “Black people love coffee and fresh juice, stop filling our neighborhoods with liquor stores and fried chicken spots.”

In the video, the Starbucks location is staffed with Black baristas and full of Black customers. Outside, several cars are seen waiting in the shop’s drive-thru lane.

The lack of coffee shops in predominantly Black neighborhoods could be partly attributed to a behavior known as “coffee shop racism.” Racial discrimination in places like coffee shops is embedded in today’s culture, The Guardian reported in 2018, citing incidents by both customers and employees toward Black patrons and workers.

Starbucks itself has received criticisms for racial discrimination, notably incidents of calling the police on Black guests and building Starbucks locations in predominantly white areas, which Eater reported to be 83% of stores in 2015. In response to the backlash, Starbucks pledged in 2020 to open or remodel 85 locations in low-income communities by 2025, according to CNBC.

Several viewers agreed with the TikToker and shared what stores they want to see in Black neighborhoods, including Trader Joe’s, another chain that has similarly been criticized for primarily operating in upper-middle-class communities.

“Fr, i want a smoothie king & chipotle in my neighborhood,” one viewer commented.

“I want a Trader Joe’s!!!!!!!!! Whole Foods and Trader Joe’s are both far from me,” a second viewer commented.

“This because we deserve luxury too,” another wrote in agreement with the TikToker.

One viewer said they’d prefer to see more locally owned coffee shops, rather than a chain, while a further TikToker said they liked having fried chicken spots nearby. “Then fried Chicken spots be hitting tho sis,” they wrote.

In reply, @ambijay stated, “I know sis, but diversify our hoods. Give us both! Shoot open a coffee and fried chicken spot.”

Some viewers questioned whether opening more shops like Starbucks in Black neighborhoods would be considered gentrification.

“Then they’ll call it gentrification,” one user said.

“Wait so this isn’t considered gentrification?” another commenter asked.

An additional viewer replied, “We can’t have coffee or something?”

Several users said in addition to coffee, they’d like to see more local markets with fresh produce. One TikToker noted that systemic racism plays a role in what stores serve Black communities.

“The liquor stores are done on purpose and chain fast food. It’s part of environmental injustice,” they wrote.