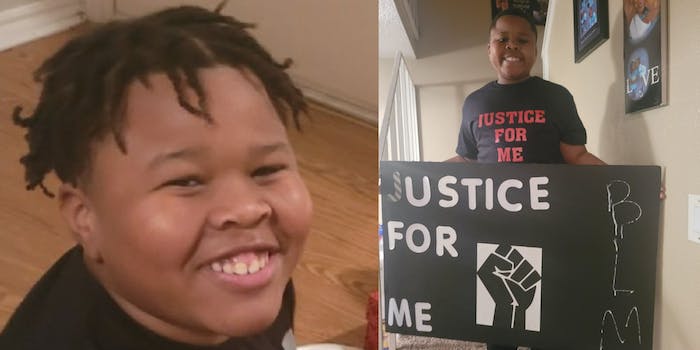 People are showing solidarity on social media with a Black middle school student whose bullies allegedly made him drink urine and harassed him with anti-Black racist comments in Plano, Texas.

Summer Smith made the allegations against the classmates of her son, SeMarion Humphrey, last Wednesday in a Facebook post. According to a GoFundMe created for Humphrey and his family, the Haggard Middle School student was invited to a sleepover a couple of weeks ago.

“While at the sleepover several white students shot SeMarion with BB guns. When he was asleep they slapped him, all while calling him racial slurs,” reads a part of the GoFundMe.

“And worse yet, they forced SeMarion to drink their urine,” it says.

The fundraiser has already garnered more than $63,000 of its intended $75,000 that it says would assist with Humphrey’s therapy and for his transition to a private school.

“I got blocked and restricted on FB for the videos/posts that I made regarding SeMarion and the heinous crimes that were committed against him, I know ironic right,” Smith wrote alongside a photo of Humphrey holding a sign: “Justice for me.”

According to Smith’s original post, Humphrey had been a target of the bullies for a while, and staff members had been complicit, Heavy.com reports. Some players on Humphrey’s football team attacked him “in the private area.” The coaches dismissed his complaints, and one even withheld his inhaler when he “felt as if [he] couldn’t breathe.”

A Change.org petition also started last Wednesday claims that the school administration had taken no action against the bullies. The petition has more than 150,000 signatures at press time.

People took to Twitter to express their rage and frustration over the incident and the school’s lack of action.

“His name should be trending. I hate that he has to be a hashtag to have justice,” writer Tinu Abayomi-Paul tweeted on Saturday. “But the police know, and the school knows. And beyond my opinion, whatever justice his parents want for him should be served.”

Others explained the situation via TikTok and urged people to join a rally for Humphrey last Friday, where nearly 300 people showed up to support him.

“Just to let you know, racism and discrimination is taught,” TikToker @melanine_junie19 said in a video. “This is not just the children’s fault. This is also the parents’ fault. There’s no way they just thought of this on the spot. This was a planned attack.”

“I want to let our community know that Plano ISD does not tolerate bullying or harassment and believe every student must be treated with dignity and respect,” she said, adding that the district is following all the “laws, policies and procedures” in its investigation.