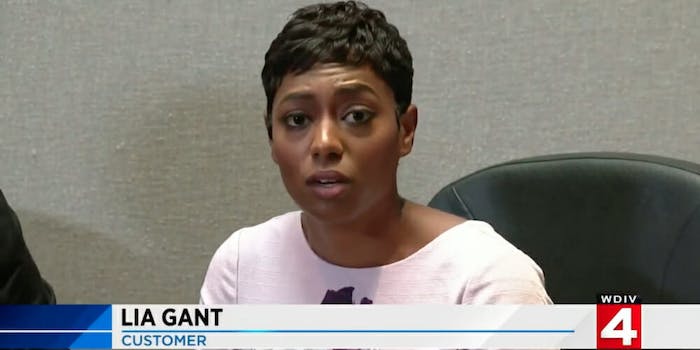 Black woman says restaurant made her give up seat for white men, police investigating

'I was called out of my name several times.'

On June 20, a black woman named Liah Gant was at the restaurant J. Alexander’s in West Bloomfield, Michigan, when she was told to give up her seat for two white men. After Gant refused, she alleges that a white bartender then poured a drink on her.

She then went to the manager, looking for answers, but was told nothing could be done.

Gant posted a video of the interaction on Facebook. Gant wrote that both she and several other patrons were discriminated against.

“I was called out of my name several times as I was trying to exit. I was then told they snuck the thug out the back so he could avoid the police. Wow,” Gant wrote. “This is me recording, however, I did not know this would come next. I just did not want the African American man attacked by the police, had no idea this was going to happen.”

Yesterday J Alexander’s protected a customer and employee after I (and several others) were discriminated against. This…

When a Black man came to support her, a white patron threw food and racial slurs at him. Management then called the police and identified the Black man as the culprit.

Now Gant and her lawyer are requesting for the restaurant to be held accountable.

“This type of behavior is archaic racism, reminiscent of the black men and women of the 1950s,” Her lawyer, Maurice Davis said in a press conference. “Our civil rights leaders fought for over a century to secure and preserve black citizens’ right to have a seat at the table, and we refuse to backslide to a nation where black people are told to give up their seat to white people.”

Davis told Yahoo Lifestyle that his client has decided not to sue at this time.

“Right now our primary focus is demanding the immediate termination of the J. Alexander employee that refused to serve our client,” he said.

The restaurant “turned the security surveillance video over to the West Bloomfield police,” according to a statement given to WXYZ Detroit.

Davis states the police are currently investigating and have identified a suspect in the case.